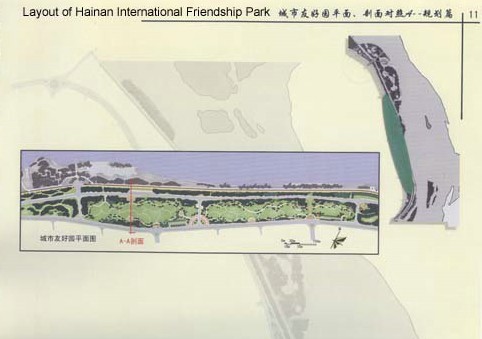 The layout of Hainan International Friendship Park
Hainan International Friendship Park (hereinafter referred to as the "Park") is planned to display the exotic art and culture from Hainan’s sister regions, in the capital city Haikou, as part of a Riverside Greenery which is under construction now.
The project of the Park was first proposed by Foreign Affairs Office of Hainan Province in 1998, and was incorporated into the Construction Project for Public Welfare by the Provincial Government in the following year.

At present, Haikou Bureau of Landscaping has completed the draft design of the Riverside Greenery , within which the Park will cover 180,000 m2 of land area, with length over 2000m and width varying from 20m to 60m. The Foreign Affairs Office will assist in its construction by inviting sister regions to present sculptures or to build gardens inside the Park. (Sisterhood Relations 36, International Friendship Exchanges Relations 11, 2009)

Our first sister region, Hyogo Prefecture of Japan, has actively responded to our proposal of the Park by financing the construction in Haikou of the "Hyogo Garden for Friendship", a Japanese style garden worth 1.2 million Yuan (about 177,000 USD). Jeju Special Autonomous Province of the Republic of Korea, also sent a pair of Dol hareubangs (black lava statues, literally translated as stone grandfathers) as presents.

It is believed that when its construction is completed, the Park will be well-placed for outdoor performances and relaxation, and add glamour to the city’s scenery. Moreover, it will further demonstrate to the world the profound friendship between Hainan and its sister regions. It will also serve as a window to showcase the art and culture of the international twins of Hainan, and a platform to promote international exchanges.

Next news: Mirage of a city of skyscrapers appears on the sea of Sanya