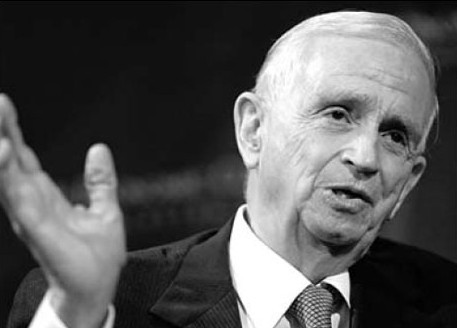 John Willard Marriot Jr, chairman and chief executive officer of
Marriot International, said his company was committed to doing
business in China and to the wellbeing of the Chinese people.
SHANGHAI – According to a Chinese proverb, when you use water, respect the source.

In all forms, water shapes and nourishes life on Earth. However, demand for fresh water is already outstripping supply in many regions around the world. An estimation from Conservation International, a US-based environmental nongovernmental organization, shows that one out of every six people has no access to clean drinking water, with two lacking adequate sanitation.

The situation is even more stressful in China, where droughts, flooding, agricultural demand and development have a significant impact on clean water supply. Water conservation is one of the Chinese government’s top environmental priorities and is highlighted as a key factor in the United Nations Millennium Development Goals.

As a consequence, better protection of fresh water resources is getting more attention not only from the public but from hotel operators as well. According to an online survey of business travelers from the US-based Marist Institute for Public Opinion in March this year, 83 percent of business travelers in China said environmentally-friendly hotel services were a necessity, higher than the 75 percent in Germany, and 51 percent in the US.

Now US-based international hotel giant Marriott International is making more effort to conserve water. Marriott announced recently that it would invest $ 500,000 in seed money over the next two years to support a vital water conservation program that helps protect the largest source of fresh water on the planet, located in the mountains in Pingwu county, in Southwest China’s Sichuan province.

The program, called the Nobility of Nature, will assist rural communities in Pingwu with sustainable businesses, such as mushroom farming and honey production, which will place less stress on the environment. Reducing erosion and sedimentation will also improve water quality downstream in both rural and urban areas. 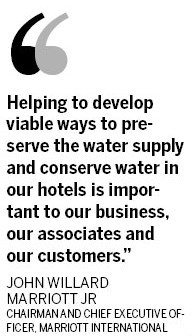 "Marriott is committed to doing business in China and to the well-being of the Chinese people," said John Willard Marriott Jr, chairman and chief executive officer of Marriott International, who flew to Shanghai to announce the move. "Helping to develop viable ways to preserve the water supply and conserve water in our hotels is important to our business, our associates and our customers," said Marriott.

Knowing that water is key to economic sustainability and prosperity, the hotel operator is committed to reducing its use, along with energy consumption, at its hotels worldwide by 25 percent by 2017. The company vowed to educate and inspire all its employees and guests to support the environmental protection drive.

In China, the company has also taken measures to "green" its hotel operations by fitting water-efficient shower heads and toilets.

In its Sanya Marriott Resort & Spa, for example, a 300-sq-m gray water tank was built in the garden, saving more than 110,000 liters of water in two years.

Between 2007 and 2009, the water and energy consumption in Marriott-branded hotels in China has been reduced by 13.5 percent and 15.7 percent respectively, it said.

"The water conservation program we launched in China furthers our such commitments, and by working with Conservation International and Pingwu county, we hope we can help rural communities in Sichuan to develop sustainable farming and businesses to take the stress off the environment," said Arne Sorenson, president and chief operating officer of Marriott International.