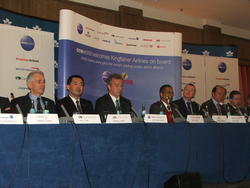 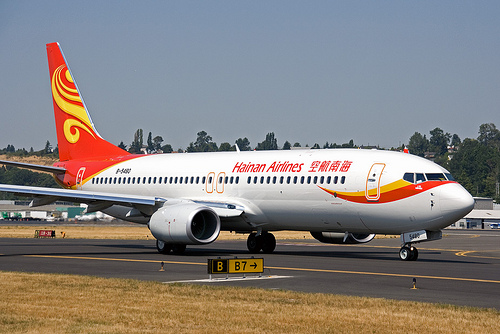 Hainan Airlines, China
Rebuffed by the choice of China Eastern Airlines to finally choose SkyTeam over oneworld, alliance’s CEO John McCulloch puts a temporary stop at the alliance’s search for a partner in China. "We are not looking for the time being to any airline in China. And I can confirm that we [did] not hold talks with Hainan Airlines, the last large international carrier in Mainland China," declared Mr. McCulloch at a press conference during the IATA Annual General Meeting (AGM) in Berlin.

For months, oneworld had hoped to be able to attract China Eastern, then seen as a major step to strengthen the alliance. Disappointment was visible as oneworld was thought to have offered the best deal to the Shangha-based carrier. Analysts explain China Eastern’s choice of SkyTeam by the fact that current China Eastern Chairman Liu Shaoyong has a closer link to China Southern Airlines – alrady a member of SkyTeam – as he used to be its CEO until last year.

"We already have a strong presence in China thanks to Cathay Pacific and its affiliate, Dragonair. Hong Kong is probably China’s best hub thanks to its efficient connections. And Cathay Pacific is recognized as one of the best airlines in the world," told McCulloch. If Hong Kong is indeed a strong hub to China, its location in the south of Mainland China would have been ideally complemented by another gateway more to the north of the country. Asked if eventually Cathay Pacific could open a second hub in Mainland China, Anthony Tyler, CEO of Cathay Pacific, replied: "We do not have the legal possibility to proceed in this direction. And I think that we do offer in Hong Kong an efficient hub able to compete with other large airports in China."

Asked about perspectives on the expansion last year at the IATA AGM in Kuala Lumpur, McCulloch declared then that BRIC countries (Brazil, Russia, India, and China) were the absolute priority to the alliance’s expansion, with China and India being the focus. With Russia’s S7 now being part of oneworld and the official announcement that Kingfisher Airlines (India) would join the alliance by next year, oneworld’s mission is half accomplished. "We now concentrate our efforts on Brazil. This is our next target as it represents a huge market. We already have a dominant position in Latin America, and Brazil fits perfectly to our strategy to remain the largest alliance in this part of the world," says McCulloch. Oneworld is still not interested in Southeast Asia but still has regular discussions with a number of airlines including Malaysia Airlines. "Now that our business is turning good again, we are now at the stage of looking more seriously at joining an alliance. And, of course, oneworld or SkyTeam are the two alliances we feel interested to join," said Tengku Azmil Aziz, Malaysia Airlines CEO.

SOURCE: www.eturbonews.com
Editorial Message
This site contains materials from other clearly stated media sources for the purpose of discussion stimulation and content enrichment among our members only.
whatsonsanya.com does not necessarily endorse their views or the accuracy of their content. For copyright infringement issues please contact editor@whatsonsanya.com