Marriott to add 13 hotels in China by year’s end 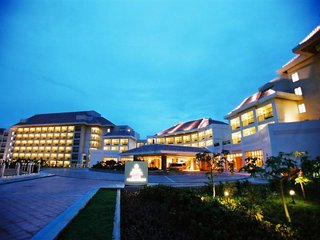 The Bethesda hospitality giant said it would have 60 hotels in China by the end of the year, up from the 47 that operate there currently. China already is Marriott’s second-largest market after North America.

Marriott said it recently signed deals for seven new hotels, including four for the first Marriott hotel in Dalian, Zhuhai, Fuzhou and Kunshan. Many such second-tier cities, while huge in population, have few if any Western hotels, said Jan Freitag, a vice president of Smith Travel Research, a lodging research firm. "China is a big, big country. . . . In those markets there’s still a gold rush going on" in the travel sector.

"China is arguably the world’s most compelling tourism market today," Marriott chief executive J.W. "Bill" Marriott Jr. said in a statement. "Within the next 10 years, China is expected to be the world’s single largest source of international tourism and its number-one travel destination."

About 133,000 hotel rooms are planned or under construction in China, more than half of the expansion in the Pan Asia region, STR’s data shows. The planned rooms are the rough equivalent of 443 average-size hotels and include multiple properties from Starwood Hotels & Resorts, Four Seasons Hotels and Resorts and other major chains. At least two leading Chinese lodging companies also are expanding quickly, one of them assisted by a recent initial public offering.

Some of the expansion plans are driven by improving roads and rising incomes that allow more Chinese consumers to plan vacations, Freitag said. Some of it springs from the growing manufacturing sector and international business travelers. And some resulted from the Olympics in Beijing and this year’s world’s fair in Shanghai.

Given the enthusiasm by the hotel industry, some cities in China may end up overbuilt. One analyst in Shanghai, Wingsee Auyeung, called the hotel market "irrational," especially in the luxury segment. "In some secondary and tertiary cities, the demand for high end hotels may not be sufficient to match the growing supply," Auyeung, PKF Consulting’s managing partner in Shanghai, said by e-mail.

Marriott’s first hotel in the region opened in 1989, the 602-room JW Marriott Hotel in Hong Kong. It established eight new hotels in China in the past 12 months, and plans 13 this year, including two more Ritz-Carltons.

"Our development strategy in China has been to establish a strong presence in major gateway and destination cities and established resort areas like Beijing, Hong Kong and Shanghai with our luxury and deluxe brands such as JW Marriott and Ritz-Carlton; then to add our upscale Renaissance and Marriott brands; followed by Courtyard in the upper moderate tier," Edwin D. Fuller, president and managing director of international lodging for Marriott International, said by e-mail. "Then to develop a strong presence in secondary cities, which in China can be formidable in their own right."

Reflecting a resurgence in demand in China, Marriott’s occupancy rates in Asia rose more than 12 percentage points in the first quarter, Fuller said, and the hotels benefited from "better than expected domestic corporate demand."

The company is well-positioned to capitalize on the fast-growing Chinese economy and tourism sector, analysts say. "Marriott’s progress in developing its markets in China is a well-planned one," said PKF’s Auyeung, noting the company executives are "appropriately selective in choosing their properties" to maintain brand image. Marriott may face ample competition in some cities and also "unrealistic expectations" on its deluxe branded hotels.

She said she expects Marriott’s Courtyard and Renaissance brands to develop well and the Ritz-Carlton to do well as "the premium brand." Marriott has six Ritz-Carltons in China, and two more opening this year — which will give it twice as many of its elegant luxury hotels in China as it operates around the Beltway.

However, the Marriott and J.W. Marriott hotels may not be as successful because their image "may not be as clear cut in the minds of the consumers," Auyeng said. Marriott spokeswoman June Farrell said both brands are thriving in China, and the company plans to open 10 more hotels there. "There is no way that the pipeline for these two brands would be as strong if they were not performing well," she said.

www.washingtonpost.com
Editorial Message
This site contains materials from other clearly stated media sources for the purpose of discussion stimulation and content enrichment among our members only.
whatsonsanya.com does not necessarily endorse their views or the accuracy of their content. For copyright infringement issues please contact editor@whatsonsanya.com