Updated: 2014-01-24 00:00:00
The Spring Festival is the largest and most important festival in China. It is the first day of the lunar calendar and usually occurs somewhere between January 30 and February 20, heralding the beginning of spring, thus it is known as Spring Festival.
Spring Couplets 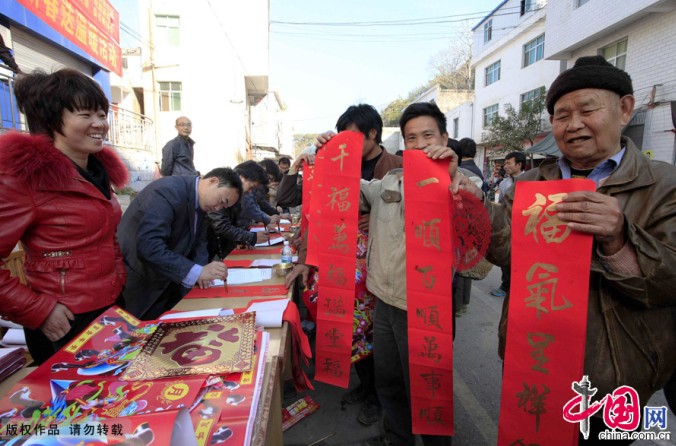 On the Chinese New Year, families in China decorate their front doors with poetic couplets of calligraphy written with fragrant India ink, expressing the feeling of life’s renewal and the return of spring.
It is said that spring couplets originated from "peach wood charms," door gods painted on wood charms in earlier times. During the Five Dynasties (907-960), the Emperor Meng Chang inscribed an inspired couplet on a peach slat, beginning a custom that gradually evolved into today’s popular custom of displaying spring couplets.
In addition to pasting couplets on both sides and above the main door, it is also common to hang calligraphic writing of the Chinese characters for "spring," "wealth," and "blessing." Some people will even invert the drawings of blessing since the Chinese for "inverted" is a homonym in Chinese for "arrive," thus signifying that spring, wealth, or blessing has arrived.
Red Packets 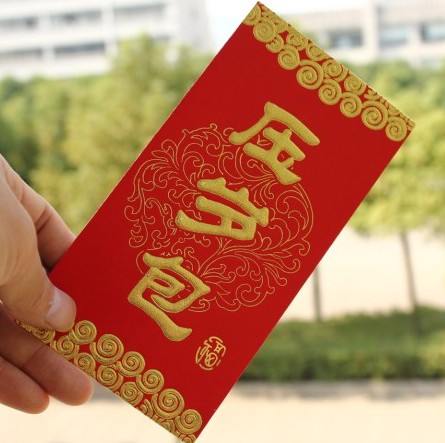 Giving Hongbao (red packets or red envelopes) during the Chinese New Year is another tradition. A red packet is simply a red envelope with gift money in it, which symbolizes luck and wealth. Red packets are typically handed out to younger generations by their parents, grandparents, relatives, close neighbors, and friends, and usually the immediate family gives Hongbao to the children on New Year’s Eve. Money given in this way may not be refused and the pretty envelopes add sincerity to the gift.
The money is also called Ya Sui Qian, meaning "suppressing age money," which is supposed to stop children from getting older. This comes from the belief that everyone becomes one year older on New Year’s Day. Red is the lucky color and will bring good luck to the person receiving the present.
Firecrackers 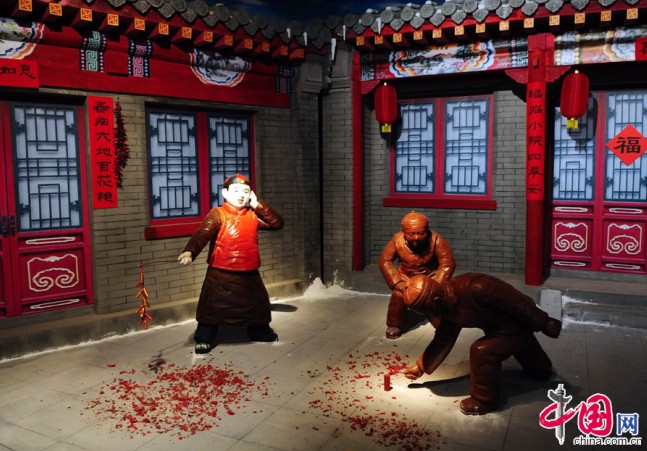 They were traditionally set off to frighten away ghosts and monsters so that the New Year would be free of them.
Legend has it that long ago there was a monster that terrorized people and animals at the end of the year. It was discovered that this animal was frightened of loud noises, bright lights, and the color red.
At midnight, on the last day of the old year, these things are used to chase away the monster until the next year.
You can hear or see fireworks and firecrackers everywhere, and this usually lasts for a few hours. Some people will continue to light them occasionally throughout the first half of the first lunar month.
Traditionally fireworks are a sign of getting rid of the old and welcoming the new. Today, firecrackers are used to add to the merry-making of the occasion.
Dumplings People from the north and south have different traditional foods that they eat on this special day.
In Northern China, people usually eat jiaozi (or dumplings), which are shaped like crescent moons. It is said that dumplings were first cooked in China some 1,600 years ago.
The Chinese pronunciation of jiaozi means midnight or the end and the beginning of time.
According to historical records, in ancient times people from both north and south ate dumplings on Chinese New Year’s Day.
Perhaps because Southern China produced more rice than any other areas, gradually, southerners had more food choices on New Year’s Day.
The shape of jiaozi resembles that of ancient gold and silver ingots or a crescent moon, and symbolizes the hope for a year of plenty.
In some places, people stuff jiaozi with sugar to wish for a sweet life; others put one or two clean coins in jiaozi — if you happen to come across one with a coin inside, it means you will enjoy good luck in the coming year.
Many families in China prepare enough jiaozi to last several days during the Spring Festival. [Photo:Xinhua]
Dragon Dance 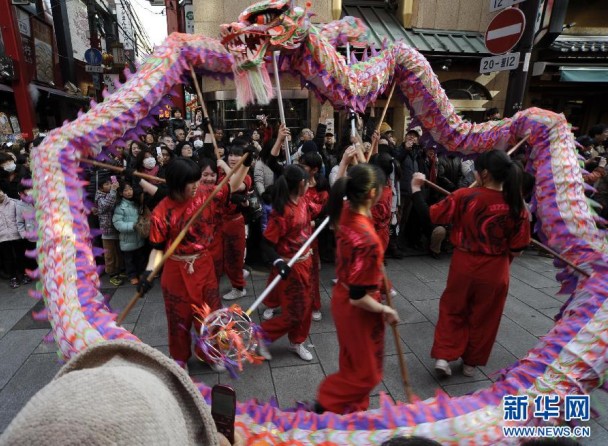 The Dragon Dance enjoys a vast diversity of models and forms. As a totem of the Chinese nation, among farming communities, it is still heralded as a token of the coming spring rains. It is also danced to drive away ghosts.

The dragons come in various forms, such as the cloth dragon, the grass dragon, the fire dragon and the segment dragon, and the dance varies from form to form. The cloth dragon has a visibly separated head and body, connected by cloth. The longer the dragon is, the more performers are involved. One person leads the dragon, guiding at whim the beast’s rise and fall, from rapid undulations to slow ripples. It will alternately seem to fly up to the sky or hide under the ocean, imitating the movement of breaking waves.

The fire dragon takes its name from the candles placed along each section of the dragon body. When performed at night, firecrackers are set off, adding to the fiery surroundings of the sinuous puppet.

The grass dragon, also called "burning incense dragon", is built from rice straw and green vines, with burning incense contained inside it. Deployed during summer nights, the dragon is like a meteor attracting a lot of insects. When the performance is over, the dragon is lowered into a pool to drown the insects.

Usually, the Dragon Dance is performed by many people using stage props. The song and dance end as the stage props come together to form the head and tail of a dragon. The dance ends with the symbolic ascension of the dragon, pervading the audience with its elegance and uniqueness. [Photo:Xinhua]