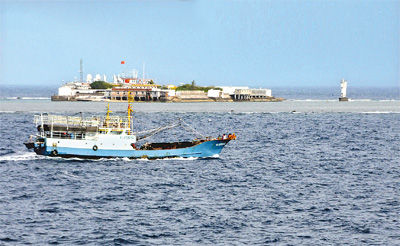 Two Vietnamese sailors were rescued Friday, more than 20 hours after their vessel sank in the South China Sea, but 25 others are still missing.
The Vietnamese cargo ship, the "Phu Tan", capsized and sank in strong gales about 110 nautical miles west of Sanya city on China's southern island province of Hainan, according to the South China Sea Salvage Bureau.

Twenty-seven people aboard were thrown into the sea.
The bureau immediately dispatched a rescue vessel to search for the missing after it received two emergency calls from the Vietnamese maritime department at noon Thursday, a spokesman said.
Rescuers said that around 7:30 pm, the rescue vessel, "South China Sea R 111," arrived at the site in strong gales of 75.6 to 100 km per hour and waves 6 meters high, but found no sign of survivors.
The vessel began searching a larger sea area in the direction in which survivors would have drifted.
At around 8:40 am Friday, rescuers found two Vietnamese sailors in waters of the Beibu Gulf, 27 nautical miles from the accident site.
The search for the 25 sailors who are still missing continues.
According to the Vietnam News Agency, the cargo ship was heading from Vietnam's central Danang city to the northern Haiphong city when it hit gales.
Previous media reports said the Phu Tan was a fishing boat, but the agency said it was a cargo ship with a crew of 27. The loading capacity of the ship was more than 14,000 tons.
SOURCE: europe.chinadaily.com.cn
Editorial Message
This site contains materials from other clearly stated media sources for the purpose of discussion stimulation and content enrichment among our members only.
whatsonsanya.com does not necessarily endorse their views or the accuracy of their content. For copyright infringement issues please contact editor@whatsonsanya.com

Next news: Rescuers search for 13 missing fishermen off Hainan