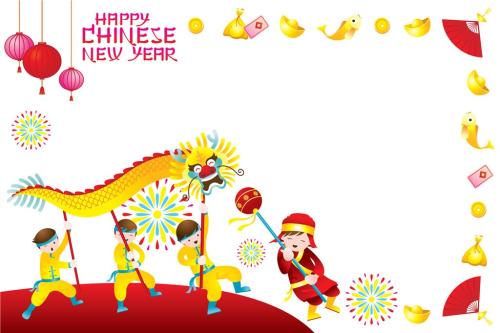 Study up and do some homework on traditions and meanings of Chinese New Year. Significance of fish, inverted "??" ("fortune" character poster), worshiping the kitchen god, chu xi (New Year's Eve), making dumplings and so on. All have deep traditional meanings and knowing some will give you bonus points.
Learn the standard gesture of Chinese New Year greetings, It's not a handshake. Rather make a fist with the left hand and cover it with the right palm; move the hands back and forth at chest level, elbows down, while saying xin nian hao, or "Happy New Year" in Chinese . This is known as gongshou, or hand/fist-wrapping, a martial arts greeting. It shows one is not bearing weapons and comes in peace.
Prepare to give hongbao (red envelopes) to relatives' children. Preferably of newly printed money, no tattered and old bills. Go to the bank in advance to arrange this. Denominations at your discretion, usually a new 50-yuan or 100-yuan bill works nicely.
Pace yourself in eating throughout the festive period at potential in-laws to be. You will probably eat nonstop and there's lots of local food. Some may seem strange, it's okay not to eat, just be polite and say you have an allergy – it always works since there are so many possible allergies.
Perfect your use of chopsticks prior to arriving. You will be using them a lot during the season. Skillful use can give you "face" and show everyone you are at least dexterous in this form of Chinese culture.
Dress in festive colors, namely red. A red sweater, tie and socks are fine. No black or white, the colors for funerals.
Despite the fact that it is a holiday period, do get up early and avoid late morning lie-ins as relatively are likely to begin visiting in the morning.
Consider inviting the family out for a meal as a courtesy. Lunch is best as many older relatives may not wish to eat after 6pm, which is early in Western culture.
SOURCE: ningbolife.com
Editorial Message
This site contains materials from other clearly stated media sources for the purpose of discussion stimulation and content enrichment among our members only.
whatsonsanya.com does not necessarily endorse their views or the accuracy of their content. For copyright infringement issues please contact editor@whatsonsanya.com