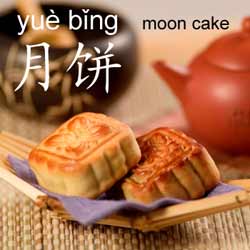 China Moon Festival is a festival for people who love to admire the full moon, while the moon on this day is the fullest and largest to the eye. The whole family gather together, feasting in good wine, fruits, nuts and cakes.
As in most ethnic holidays, there are legends to honor. The most popular legend for this holiday is traced to the year 2000 B.C. This is the story of Hou Yih, an officer of the imperial guards.
One day, ten suns suddenly appeared in the sky. The emperor, greatly perturbed and fearful that this occurrence presaged some great evil to his people, ordered Hou Yih, an expert archer, to shoot nine of the suns out of the sky. The great skills with which Hou Yih accomplished this feat impressed the Goddess of the Western Heaven.
Since Hou Yih was also a talented architect, the Goddess commissioned him to build her a palace made of multicolored jade. His work so pleased the Goddess that she rewarded him with the possibility of everlasting life. She gave him the elixir of immortality in the form of a pill. He was not to swallow the pill until he had undergone a year of prayer and fasting. Hou took the pill home and hid it.
Hou’s wife was a divinely beautiful woman named Chang Oh. One day she discovered the hidden pill and she swallowed it. The resulting punishment was immediate and Chang Oh found herself airborne, bound for eternal banishment on the moon. As she soared upwards, her husband, Hou Yih, desperately tried to follow but was swept back to earth by a typhoon. Chang Oh’s divine beauty enhanced the brilliance of the moon with her own radiance. Now, Chinese people gather each Moon Festival to admire her.
The 2010 Mid-autumn Festival falls on September 22, 2010 and the Mid-autumn Festival in 2011 falls on September 12.
Days off for 2010 Mid-autumn Festival:
September 22-24 off work
September 19 and 25 at work
SOURCE: www.chinaholidays.com