About Sanya – What to do! 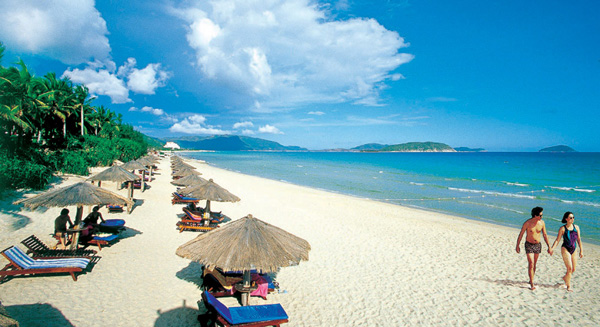 Sanya Yalong Bay, one of top 10 beaches in Asia
Sandy white beaches, lush jungle and swaying palm trees — Hainan Island has them all in abundance, and Sanya, on the southern coast, is the best place to base yourself for swimming, water sports and sun bathing. Stay at one of the new luxury hotels along Sanya’s gorgeous coastline, find budget accommodations in town or hobnob with the backpacking set at one of a number of pleasant hostels. Wherever you stay, you’re never far from the water. You can join the crowds on the popular beaches of Yalong Bay, visit Buddhist temples, linger in tropical gardens and see rare Macaque monkeys on Nanwan Monkey Island.

If you’re after a little privacy and a more pristine beach experience, hire a driver, ride a bicycle or take a taxi to one of the island’s more remote spots. Today, what was quite recently a quiet fishing port has become home to luxury resort hotels like the Marriot, Resort Horizon, Resort Golden Palm and Kempinski, just to name a few. Although a bit sleepy and sparsely populated by Chinese standards, there’s plenty to do in Sanya when you’re not lounging by the surf—the bustling night markets are a must and there are a growing number of restaurants, bars and clubs to help you relax after a hard day at the beach.

It might be hard to believe, but balmy Hainan Island was once place of exile and imprisonment. For hundreds of years, during the Tang, Song, Yuan and Ming Dynasties (618-1644), outlaws and outcasts were shipped from the mainland to do time in the heat of what is today, with the benefit of air conditioning and modern medicine, quite a pleasant place to spend, rather than do, time.
During the 1920s and 1930s, Communists who escaped Guomindang forces on the mainland made Hainan a base of operations, later fighting the Japanese, who occupied the island during World War II. After the Communist victory in 1949, Hainan remained largely undeveloped. In 1988, that all began to change, as it was declared a Special Economic Zone. Since then, tourism and industry have invigorated the economy of this tropical enclave. Sanya’s fascinating mix of traditional Han Chinese and ethnic minority cultures—the Li people make up roughly 16% of the population, with Zhuang and Miao communities adding to the mix—creates a city teeming with rich art and dance traditions. Buddhism, which reached Hainan shores during the Tang Dynasty (618-907), remains the dominant influence in the province’s culture and folk art.
Sharing the same latitude as Hawaii, Sanya has a tropical monsoon climate with warm weather throughout the year. Temperatures rise in March through November, with monthly averages ranging between 25-28ºC (77-80ºF). May through October, monsoon season brings short daily rains. The best time to visit Sanya is from March to May or October to November when the Chinese New Year and Christmas crowds are gone and rain becomes less frequent.
SOURCE: www.chinatravel.ne
Editorial Message
This site contains materials from other clearly stated media sources for the purpose of discussion stimulation and content enrichment among our members only.
whatsonsanya.com does not necessarily endorse their views or the accuracy of their content. For copyright infringement issues please contact editor@whatsonsanya.com