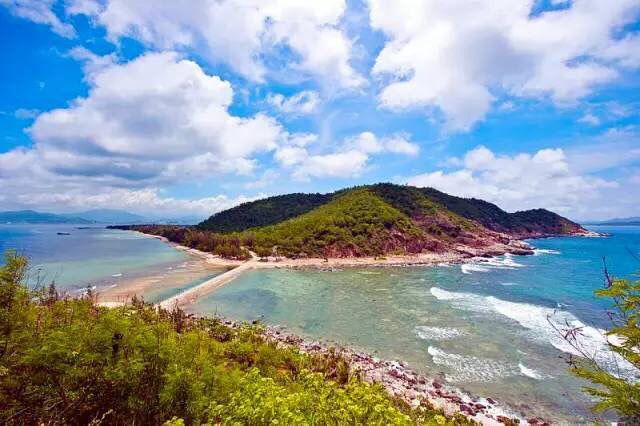 Approximately 20 km (8 miles) southwest away from downtown Sanya lies West Island, the second largest island of Hainan Province. West Island is one of the famous spots in Sanya that best illustrates the city’s unique blend of tourism and culture.

A playground for holidaymakers

With fewer than 3,000 residents, most of them living mainly on fishing, this quiet island is attracting more and more vacationers who prefer to be surrounded by water.

The island is one of the six legal spots for snorkeling and scuba diving in Sanya, as its surrounding waters belong to a National Coral Reef Nature Reserve in Sanya. Underwater visibility ranges from 10 to 15 meters, permitting divers to enjoy a plethora of spectacular scenes. You can see a variety of coral reef, as well as all kinds of tropical fish, such as lion fish, starfish, sea anemones, and other marine life.

Stroll down the beach on West Island in the late afternoon and, aside from people relaxing on the sands, you may see couples having their wedding photographs taken and local lads fishing in the shallows with hand-thrown nets. The island has a range of water sports on offer such as fishing, flying fishing boat, kayak, diving, gliding, and jet skiers out in the bay.

Families on the island

A “coral village” on the island is the place to get an instant hit of this nice combination of culture and tourism. Dating back to the Ming Dynasty, the village itself has a history of over 400 years, featuring a unique coral culture.

As the island has been home to fishing tribes for generations, local fishermen in the village have found an ingenious way of putting mountains of coral to good use — by building houses. They started to build houses using dead coral.

Locals believe these coral wall structures won’t erode in the salty sea breeze. Some houses have been standing for hundreds of years and show no signs of decay.

Although wealthier villagers have begun to move to nearby modern homes, these coral houses still dot the landscape, and exist side by side with international island tourism.