As a coastal tourist city, Sanya is famous for its tropical scenery, its places of historic interest and its minority customs. It has many tourist attractions which draw tourists from China and all over the world.

When enjoying the tourist attractions in Sanya, be sure you do not miss the city’s 3 famous spots which not only boast beautiful natural sceneries and cultural diversity but are also full of romantic legends.   ​​​

The myth goes that the peninsula got its name from a moving love story.

Once upon a time, there was a Li ethnic hunter who was chasing after a deer that was actually a fairy lady from the heavens who fell in love with the young man and turned into a deer in order to seduce him. The deer was chased to a cliff, below which was the boundless sea. When the Li man got his bow ready to shoot, suddenly there rose up a flash of fire, and after a gust of smoke cleared the man saw that the deer had turned into a beautiful Li ethnic girl. The girl and the young man fell in love and married, forming a happy family and living happily ever after.

The term “Luhuitou” means “deer turning its head back”, hence, the hill, the village, the peninsula and the park are all similarly named Luhuitou. The lovely legend draws uncountable tourists to Sanya where couples pledge their affection. You, too, will likely be intoxicated in love in the gentle mountain breeze of Luhuitou. 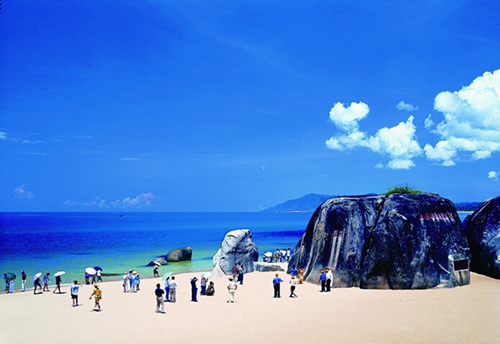 A tragic love story lies behind the Tianyahaijiao Scenic Spot in the Oriental version of Romeo and Juliet. It tells the story of two young lovers who eloped regardless of their parents’ disapproval. When cornered on a cliff by people sent by their parents, the pair jumped into the sea. Before drowning, a storm suddenly occurred in the area and they were hit by a lightning bolt that turned them and their pursuers into two huge rocks, with “Tianya” and “Haijiao” carved on them.

This legend has inspired countless lovers to take a romantic trip here with many of them even holding their wedding ceremony in the park. The International Wedding Ceremony offered here consists of traditional and contemporary activities designed to promote an atmosphere of love at Tianya Haijiao for both the young and old.

Wuzhizhou Island is also known by the name "Lover’s Island" due to a beautiful legend with its setting here.

The legend goes that one day a young fisherman met a pretty girl on the island. They fell in love and decided to meet there every day. The girl was the daughter of the Dragon King, who learnt of their love affair locked her up in her own home. Ultimately the girl managed to escape and ran out to meet her sweetheart. The Dragon King got extremely angry and used his magic to turn the lovers into two big stones on the island. Since then, the place has become something of a Mecca for Lovers to visit the rocks and think about the passionate love of the Dragon King’s daughter and the young fisherman.