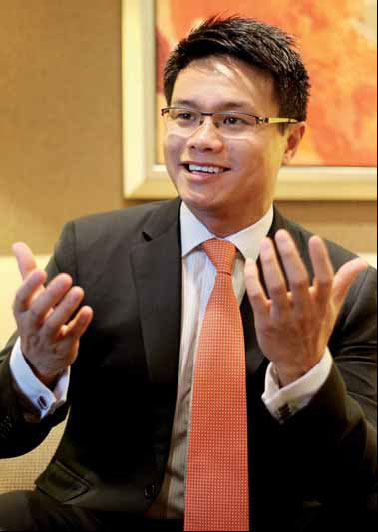 Dr David Chu, the man behind the Mission Hills Group — the driving force for China's golf boom and owner and operator of the world's two largest golf properties — will be honored with KPMG's Lifetime Achievement Award 2011 in recognition of his outstanding contributions to international golf.
Established by KPMG in 2006, the Lifetime Achievement Award is dedicated to ambassadors of the game and the business of golf. Dr Chu will join an all-star cast of past honorees which includes the 2010 recipient Greg Norman, along with Jack Nicklaus and Arnold Palmer who won in 2008 and 2009 respectively. The first two winners of the Lifetime Achievement Award were Gary Player (2006) and long-time European Tour Executive Director Ken Schofield (2007).
The 2011 Award will be presented at KPMG's upcoming Golf Business Forum, to be held in Dubai from April 17-19. The KPMG Golf Business Forum is widely regarded as the most important international golf business-to-business event and brings together the entire spectrum of the golf industry — from developers and investors to operators and journalists — to meet, learn, exchange ideas and do business. The event now attracts more than 250 participants from over 40 countries. Next year's Golf Business Forum will feature an engaging, dynamic agenda focusing on the changing marketplace and format with interactive discussions of key industry leaders on a variety of important topics. The conference will start with an Opening Ceremony when the Lifetime Achievement Award will be presented to Dr. Chu.
As founder and chairman of Mission Hills, Dr. Chu and his legacy sit perfectly amongst KPMG's former award winners. Dr. Chu has already been recognized by the PGA TOUR for his groundbreaking contributions to golf in China, and his efforts in popularizing the sport globally, by establishing an award with his name – the David Chu Award. The PGA TOUR honored Dr. Chu as the Award's first recipient in November 2009. Previously, the PGA TOUR has only honored Byron Nelson, Arnold Palmer, Jack Nicklaus, and Payne Stewart similarly in the past. Dr. Chu is the only Asian who has received this recognition. Since 2007, Dr. Chu has been the only Asian to be ranked amongst the "Most Powerful People in Golf " by Golf Inc. magazine, and this year he stands at No. 9 on the list for transforming China into golf's frontline of growth, most notably through his brand-new property on Hainan Island.
Dr. Chu's bold plans for golf development in China in the early 1990s have blossomed into the world's largest golf complex. Its 12 courses were designed by the game's greatest players and architects and – along with two five-star resorts, three world-class spa facilities and residential developments – spread across an area of over 20 square kilometers from Shenzhen to Dongguan in southern China, just 30 minutes from Hong Kong.
Devoted to developing golf in China, Dr. Chu drove Mission Hills to host the first international golf tournament ever held in the country, the 1995 World Cup of Golf, and, in 2001, brought Tiger Woods' to China for the first time, one of the game's most important recent landmarks. He also secured hosting rights for the OMEGA Mission Hills World Cup for 12 consecutive years from 2007.
Andrea Sartori, Head of KPMG's Golf Advisory Practice in Europe, Middle East and Africa said: "In recognizing Dr. David Chu with our most prestigious honor, we are paying tribute to his remarkable vision for the future of golf in China."
"While the golf industry is now in full agreement that the game's future is very much in Asia, we are only now catching up to something that Dr.Chu recognized more than 15 years ago. For that, he is a true visionary and fully deserves his place alongside names like Player, Palmer and Nicklaus as a Lifetime Achievement Award winner," he added.
Dr Chu's latest project Mission Hills Hainan continues his groundbreaking achievements. The development is central to a larger, government-backed urban planning initiative to make tropical Hainan Island one of the world's leading tourism destinations by 2020. Dr. Chu's proven track record transforming barren land into economically productive enterprises make his involvement crucial to the program's success.
Mission Hills Hainan hit the spotlight in October 2010 when it hosted Asia's first international pro-celebrity golf tournament, the Mission Hills Star Trophy, featuring golfers such as Greg Norman, Colin Mongomerie, Lorena Ochoa and Annika Sorenstam and global entertainment stars such as Catherine Zeta-Jones, Hugh Grant, Matthew McConaughey and Christian Slater.
"Our vision of Mission Hills spearheading the growth of golf and leisure in China has come to fruition," says Dr. Chu. "China is now the fastest growing golf region in the world and we're honored to continue to lead the way, especially with the successful launch of Mission Hills Hainan, China this year."
For more information about KPMG's Golf Business Forum and the KPMG Lifetime Achievement Award, please visit www.golfbusinessforum.com.
About Mission Hills Group

The Mission Hills Group, owner and operator of Mission Hills Shenzhen and Mission Hills Hainan China, is the pioneer in the country's fledgling hospitality, sports and leisure industry (www.missionhillschina.com).
Mission Hills is recognized as the leading golf brand in the world and synonymous with high-end, luxurious residences of rare and exquisite design has created the ultimate leisure and wellness resort. Mission Hills has hosted more than 100 international tournaments, including the 1995 World Cup of Golf and the Tiger Woods China Challenge in 2001. In 2007, Mission Hills began its role as host of an unprecedented 12 editions of the Omega Mission Hills World Cup.
Mission Hills Shenzhen

Mission Hills Hainan lies in the volcanic region of exotic Hainan Island, China. The resort sets a new standard in leisure, recreation and wellness experiences. Nestled amid lush, green gardens, the resort caters to golf enthusiasts and comprises specially-designed golf courses, each one incorporating the native lava rock formations. Other state-of-the-art features include 518 elegantly designed guest rooms and suites, a three-story clubhouse, meeting facilities, 12 world-class restaurants, a fully-equipped sports and recreation center, Hainan's only aquatic theme park, therapeutic volcanic mineral springs, a spa oasis, and a shopping arcade.
Mission Hills Hainan's Blackstone Course hosted the first inaugural Mission Hills Star Trophy in October 2010, a ground-breaking celebrity pro-am golf tournament in Asia. It is also the home to the Omega Mission Hills World Cup in November 2011. A magnificent addition to Hainan's tropical island paradise, Mission Hills Hainan, is poised to be the island's premier sanctuary, attracting visitors from around the globe.
SOURCE: www.worldgolf.com
Editorial Message
This site contains materials from other clearly stated media sources for the purpose of discussion stimulation and content enrichment among our members only.
whatsonsanya.com does not necessarily endorse their views or the accuracy of their content. For copyright infringement issues please contact editor@whatsonsanya.com