As the one-year anniversary of the opening of the first duty-free store in South China’s resort city of Sanya draws near, officials said more stores are in the pipeline and a rebate cap on purchases is likely to be lifted. 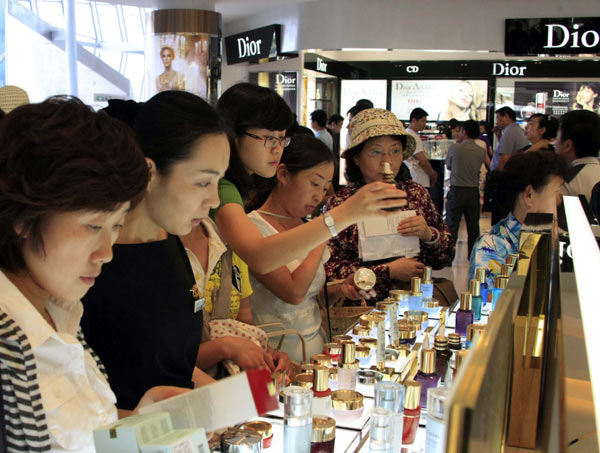 Shoppers browse through brand name cosmetics at a duty free store in Sanya, Hainan province, during Spring Festival in February.

China launched the duty-free policy trial last year in the tropical island province of Hainan, which allows tourists to spend up to 5,000 yuan ($754) on imported commodities without paying taxes.

Wang Wei, director of the department of social development for the National Development and Reform Commission, told China Daily the rebate cap on commodities may be lifted.

"The policy has just been carried out for one year. The rebate cap will definitely be increased in the long run, but it takes time to do the assessment," Wang said on the sidelines of the Boao Forum for Asia 2012.

Tan Li, vice-governor of Hainan province, said the duty-free policy is the most valuable and influential part of the government’s preferential policies to boost Hainan as an international tourism island.

Since the opening of the duty-free stores in Sanya on April 20 and at Meilan Airport in late December, total sales of duty-free commodities have reached 1.6 billion yuan, Tan said at a news conference on Sunday.

Experts said the sales figures are equivalent to the revenue of a large shopping center in Beijing.

Tan also said the visa-free entry policy has greatly boosted tourism in Hainan. Tourists groups from 26 countries can enjoy visa-free access to Hainan with a maximum stay of 15 days.

The minimum size requirement of tour groups from Russia, Germany and South Korea has been reduced from five to two people, and the maximum stay for visitors from the three countries has been extended to 21 days.

In 2011, about 90 percent of the province’s foreign tourists used the visa-free access, he said.

Tan also launched an aggressive 10-year plan for Li An, a small town under the Lingshui autonomous county, in the southeastern corner of Hainan.

The plan includes the construction of a large duty-free shopping mall, a sea world, private museums and cultural industries.

As a pilot zone for the international tourism island, Li An will leverage a host of trial policies for duty-free shopping, sport lotteries, forest tourism and offshore finance, Tan said.

With an estimated total investment of 50 billion yuan in the coming five years, the small town will become a popular place for investment, said Tan.

Wei Jianguo, secretary-general of China Center for International Economic Exchanges, said Hainan should make full use of its unique position as an international tourism island.