Beijing? Check. Shanghai? Check. The Great Wall and Forbidden City? Can’t miss. They are all worth the trip, beacons of China’s 5,000-year-old civilization, but here is something you or your travel agent may not have thought of as part of China tourism: beach time.

At Sanya, on Yalong Bay at the southern end of Hainan Island, sun and surf are the main attractions. One of China’s 28 provinces, Hainan lies only 30 miles off the mainland’s southern rim.

Forget whatever you know about China. Think rows of umbrellas on creamy beaches and poolside drinks at languorous international-brand resorts. Think tropical warmth, palm trees and humid breezes from the South China Sea. For children – or grown-ups, for that matter – who can take only so much ancient civilization in one trip, Hainan Island may be a welcome respite from culture fatigue before heading home. 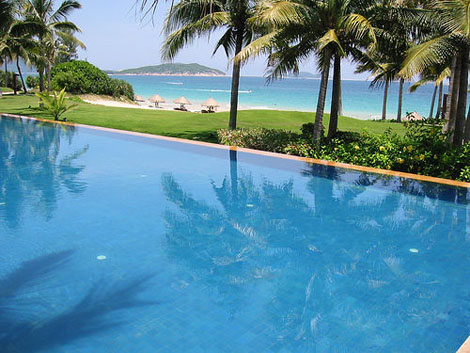 The sea was a perfect high 60s during my recent visit, and the hot sun came and went between bulbous tropical clouds. I watched as a young father and his toddler son let the gentle waves roll across their bodies. Behind them, older children dug happily in the clean sand. A pair of European women in skimpy swimsuits basked in the sun farther up the beach. But as I looked around, the sunbathers seemed rare. Then I realized why: Almost everyone around me was Chinese, and the last thing a Chinese person wants is a tan.

Not so Jeff Denny, of Cincinnati, and his wife, Melissa, who with their children, Caleb, 13, and Holly, 10, had traveled from Shanghai to spend some time on the Sanya beaches during the recent May Day holiday. It was their second visit here since being posted to China by Procter & Gamble. But despite her proselytizing among ex-pat friends in Shanghai, Melissa Denny noted, Hainan does not enjoy the recognition as a tropical Asian destination that Phuket in Thailand does, or Bali in Indonesia.

"When Americans come to China, they go to the Great Wall, the Summer Palace, the Forbidden City, maybe Xi’An and the terra cotta warriors," complained Zhang Qi, director-general of the Hainan Provincial Tourism Administration. "But here in Hainan, we also have seaside resorts. Americans just don’t know about Hainan and the beaches."

That can be a good thing for those who do come. Although resorts along Yalong Bay include well-known names such as Sheraton, Marriott and Hilton, American guests can still enjoy the feeling of being in a foreign country. Room prices, from about $200 a night in low season up to $800 during February’s Chinese New Year holiday, mean that only upper-crust Chinese vacation here (although less luxurious accommodations also are available). But the number of Chinese families with money to spend is rising fast, so reservations may become hard to get.

Given China’s record in spoiling the environment, swift growth in the number of tourists could also threaten the island’s pristine water and uncluttered beaches. Wei Liucheng, the Hainan provincial governor, suggested recently that limits on the number of visitors may be needed.

But at this point, Zhang said, Hainan’s tourist department is trying to persuade U.S. travel agencies to send American vacationers on direct flights to the island, which has two international airports. China has relaxed immigration rules so that tourists from 21 countries, including the U.S., can enter Hainan without visas if they come in groups of five or more.

For tourists already in China, however, Hainan is a quick hop. Direct flights from Beijing, Shanghai, Hong Kong and other Chinese cities are frequent. A ferry links Zhanjiang on the mainland to Haikou. And train service (provided via rail-equipped ferries) from mainland cities all the way to Sanya was inaugurated for the May Day holidays. 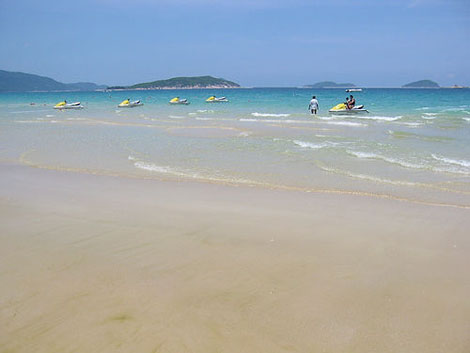 The weather on Hainan is consistently Hawaii-like, and the sun shines 300 days a year, often ceding the sky to clouds and rain then reappearing within a few hours.

Native islanders, who number about 8 million, speak a dialect that sounds miles away from Mandarin, China’s official language. Most are from China’s major ethnic group, the Han, but more than a million are from the Li minority, which claims to be the earliest inhabitants of the island. Islanders’ ready smiles and easygoing ways also seem to set them apart from the often-stressed-out residents of big mainland cities. Visitors who savor the island’s seafood, tropical fruit and clean air will understand why. The living is easy.

Haikou, the provincial capital at the northern tip, started the island’s tourism industry and boasts a number of resort hotels within a 20-minute drive of the downtown. But Sanya, a three-hour drive south, has become the premier tourist destination in recent years, with a dozen major resorts overlooking Yalong Bay’s gently sloping beach on one side and a deeply green golf course on the other.

Boao, about halfway down the island’s east coast, has entered the competition, with a luxurious resort and conference center overlooking the Wanquan River as it flows into the sea. Wang Hong, the Sofitel-run resort’s deputy general manager, said TV reports from the conference center with its spectacular scenery in the background have drawn Japanese and South Korean golfers.

As Wang and I lunched on grilled shrimp and Sheban fish, boats ferried tourists out to a sand spit with a river beach on one side and a sea beach on the other. Wang proposed a chardonnay he said was the best produced in China. Who was I to disagree?

The only thing between us and the water was a latticework of two dozen hot-spring pools, each dosed with a different Chinese herbal medicine to soothe what ails you. I don’t know about the power of traditional Chinese medicine, but the chardonnay seemed to heal my aches. And the wind smelled so good I wanted to bottle it to take back to polluted Beijing.

It is cheapest to fly to Hong Kong, then to Sanya, on Hainan’s southern end, for about $237 round-trip on Dragonair. Flights from Hong Kong to Haikou, the capital city on the northern end of the island, start at $424 round-trip on China Southern. Train and ferry service also link Hainan to the mainland. The two-hour train to Zhanjiang is about $20; the overnight train to Guangzhou about $50.

SOURCE: scenery.cultural-china.com
Editorial Message
This site contains materials from other clearly stated media sources for the purpose of discussion stimulation and content enrichment among our members only.
whatsonsanya.com does not necessarily endorse their views or the accuracy of their content. For copyright infringement issues please contact editor@whatsonsanya.com