I got in touch with Sanya Sidecars and told them what I was looking for, ‘I want a real Hainan weekend with a beach, snorkelling, fishing, camping, BBQ on the beach’.

They’re reply was ‘no problem, do you have a Chinese driving licence?’ Which I do have and also have a lovely wife and two great kids.

Dave and Simon, the owners of Sanya Sidecars arranged one Chang Jiang 750 sidecar for me to ride with my son Lee as a passenger in the sidecar, my daughter Jen rode as sidecar passenger with Simon and Dave chauffeured my wife. So we had three CJ750s for the trip and Sanya Sidecars arranged everything including a Landwind SUV and driver to carry our luggage, all the camping equipment, snorkelling and fishing gear plus coolers of drinks and food for BBQ. 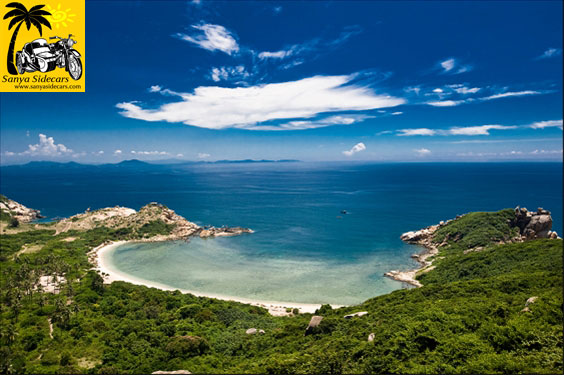 Everyone went quiet when we came around a corner and there below us wasthe Secret Beach.
A crescent of white sand with two rocky peninsulas at each end jutting out into the blue sea
protecting the bay. It was absolutely perfect.
The Sanya Sidecar crew arrived at our hotel in Sanya Bay before 8.30am, loaded the luggage into the support vehicle, handed out helmets and gave me a quick briefing of the bike and the unique road conditions of Hainan. These included, watch out for interesting drivers, stay in convoy between Dave’s lead bike and Simon bringing up the rear, avoid buffalo shit at all costs and enjoy the fun.

We cruised down the beach of Sanya Bay and then headed to ‘The Binlang Village’, a real Li minority village which is beautifully laid out along a river with Binlang trees shading you as pass along the avenues. After stopping off at the visitor centre where there’s a pictorial history of the village and it’s people with a great display of artefacts we had morning tea in the shadows of a huge Banyan tree.

Once back on the bikes riding through the farms on the plains and foothills then up a concrete road up into the mountains. It’s like driving through the vegetable and fruit section of a natural supermarket with shouts of ‘beans, eggplant, lettuce, cucumber, squash, pumpkin, mango, banana, papaya’ coming from Lee in the sidecar as we passed through each farm. Up in the mountains the roads are tree lined with a canopy of rubber tree plantations creating a cool breeze in as we rode taking in the surrounding landscape of rainforest covered mountains until we arrived at a lake. 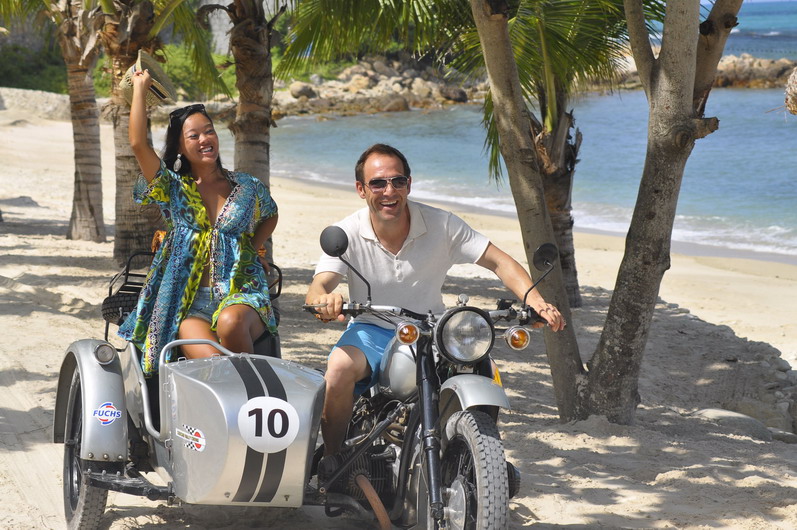 Sidecar ride with seabreezes whispering pass your ears, fresh air and sea view, sea view
everywhere, made inviting with palm trees dancing in the air.
Sitting on the tailgate of the support vehicle on the edge of the lake was Django, the driver, with a cooler box of drinks, cold towels, a platter of fresh cold coconuts, watermelon and sub sandwiches. Lunch was served!

After lunch we had just over an hours ride to the Secret Beach where we would camp for the night. The ride down from the lake in the mountains to the road to the secret beach was all concrete or tarmac and as long as you avoided the buffalos and their extremely slippery excrement the ride through the valleys and passes was amazing. You can really see why Hainan is called the Hawaii of the east; everything is so green and lush with the mountains covered in dense rainforest.

The road to the Secret Beach was a different story. It’s a dirt road, muddy in places, that follows a small river down the valley between steep sided hills to the coast. It’s a bit tricky and it was the first time I’d ridden a CJ750 off-road as there’s not much opportunity in Shanghai where I have my own bike. I got the hang of it and started to enjoy riding off-road but not as much as my wife and daughter who I could see were having way too much fun.

Everyone went quiet when we came around a corner and there below us was the Secret Beach. A crescent of white sand with two rocky peninsulas at each end jutting out into the blue sea protecting the bay. It was absolutely perfect.

Awaiting us as we entered was Django lying in a hammock with five dome tents set up on the grass under the shade of the coconut trees. Our tents had foam mattresses, pillows, sheets, a light and bug spray. Home for the night, but it was time for a swim to wash away the road and after we were shown to the showers and got ready for the evening.

The Sanya Sidecar crew were busy with the BBQ as we all went down to the beach, laying out what looked like an absolute feast of seafood. Shrimp, squid, shellfish, tuna, grouper, baked potato, corn, pasta salad and a fresh green salad. This was all served up with a glass of wine as the sun was going down and by the time we had finished eating the sky was lit up with more stars than I’ve ever seen and there was only our group in the whole bay.

Woke up to the sound of a pan banging, matching the banging in my head as we’d put one too many logs on the fire last night sitting around swapping stories with the crew. I dragged myself out of the tent to a breakfast of fresh fruit, cereal, bagels and coffee.

Plan for the day was to go for a snorkel in the bay which has its own reef; it was amazingly clear, lots of fish and plenty of coral. Simon led the snorkelling safari and showed us crevices and tunnels in the reef which is where the bigger fish hang out and he was very attentive taking good care of the kids.

Dave took over when we came ashore and led us all with rods in hand to his favourite fishing spot which was a short hike to a small bay just around the peninsula. Lee caught an eel, Jen and my wife both caught a bunch of small fish that were thrown back and I proved I would not starve if I had to fend for myself.

After lunch it was ‘do what you want time’ while the Sanya Sidecars crew packed up the camp for a 2.30pm departure for a leisurely ride back to our hotel to pick up the rest of our luggage and head to the airport to catch our flight back to Shanghai.

I can’t recommend Sanya Sidecars highly enough. A great bunch of guys, very professional, really know their way around and couldn’t do enough for the kids.

Only one complaint, not long enough.