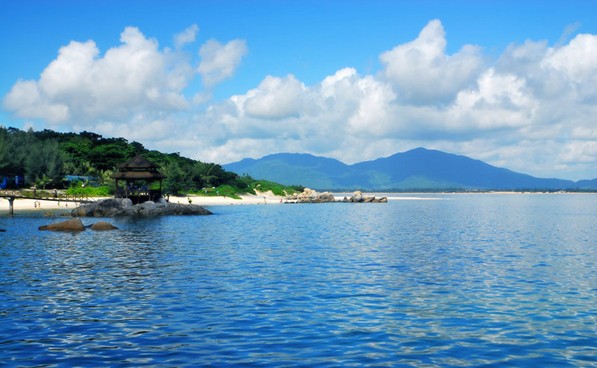 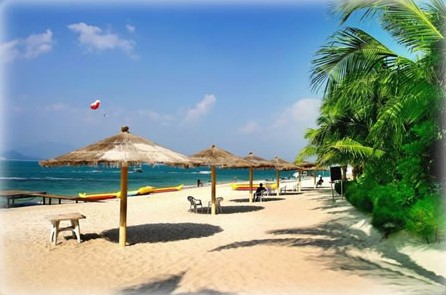 Wuzhizhou Island is also known as the Lover’s Island or lover’s paradise
Wuzhizhou Island is also known by the name "Lover’s Island" due to a beautiful legend. One day a young fisherman met a pretty girl on the island. They fell in love and decided to meet there every day. The girl was the daughter of the Dragon King, who learnt of their love affair and put her in a locked house. Ultimately the girl managed to escape and ran out to meet her sweetheart. The Dragon King got extremely angry and used his magic to turn the lovers into two big stones on the island. Since then the place has become something of a Mecca for Lovers. 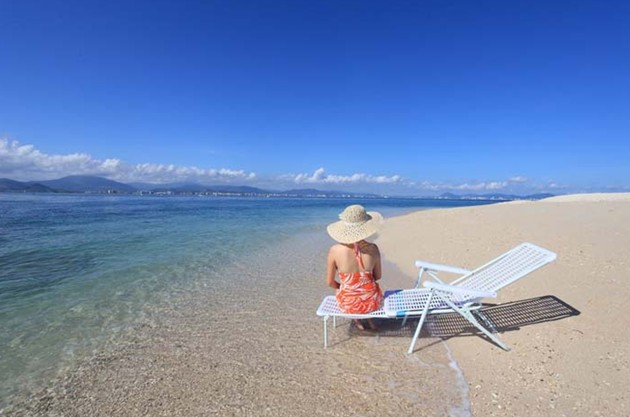 The Island is known locally as an example of all that was perfect about Hainan Island – white beaches, sunshine, various tropical plants and varied sea life. It offers clear blue water with visibility down to 18 metres and colorful coral reefs.

Jagged rocks soar loftily into the sky and fall vertically across the sea. Stormy sea beats the shore and provides a splendid sight. Winding center wood and undulated grassland appears like a dancing girl in green. Calm and tranquil beach lies in the north and contains pure white and fine sands as if a jade from God.

Local vegetations include tall and lofty arbors and flourishing and low shrubs, both of which you may encounter anywhere. You may experience some exotic flowers and trees, one of the dominant foods for those dinosaurs in ancient times, and dracaena draco, the oldest plant remained so far around the world and thus titled as "the king of longevity under the sun" and also botanic landscapes created by some parasitical plants and strangling plants prevailing in tropic zone.

The Island is known locally as an example of all that was perfect about Hainan Island – white beaches, sunshine, various tropical plants and varied sea life. The main attractions include Goddess Mazu Temple, Lover’s Bridge, Sunrise Rock, and Gold Turtle Stretching forward to the Sea, Lover’s Island and "Life Well." 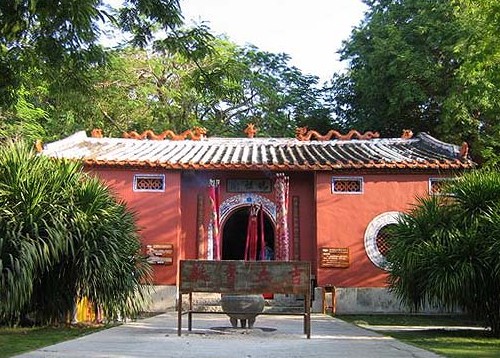 Goddess Mazu Temple on Wuzhizhou Island
Temple Mazu, the patron saint for navigation industry, is consecrated here. Initially it was built up in A.D. 1893 (and thus it has a history of more than one hundred years) as a hospice to consecrate Can Jie, initiator of Chinese characters.

The hospice has been gradually ruined due to poor maintenance after Qing Dynasty. Local fishermen had no idea of which deity was this hospice for, so they pulled down the original joss and began to consecrate Goddess Mazu, the patron saint for navigation industry in their belief. At last Goddess Mazu Temple was also ruined and existing temple was the result of reconstruction in 1993 when local developers commenced large maintaining campaigns within the Island. 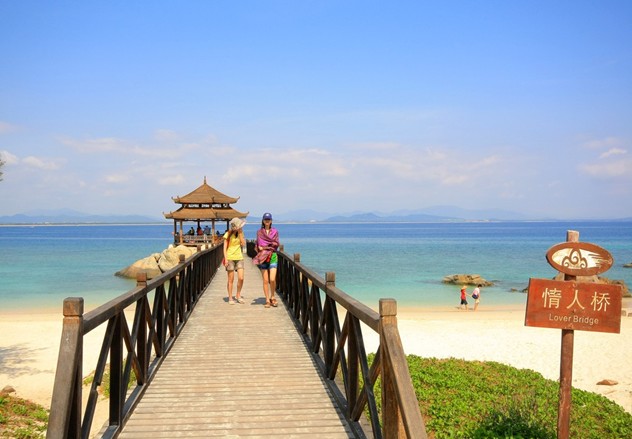 Lover’s Bridge
Lover Bridge, originally an iron chain bridge, was an offshore watch post once used by the island defending army. It would need some courage and flexibility if you want to walk on it. Some pretty girls may be eager enough to walk through the chain bridge and step into the watch post to find something new. However, they are still worry about risks of falling into the deep sea. So the girl would grasp his boy friend’s hands firmly and yell and walk forward. Therefore the bridge got a romantic name as "Lover Bridge."

The previous iron chain bridge has been renovated as present wood board bridge by us for the safety of guests. Have a girl friend? Then it would be an opportunity here to walk through the "Lover Bridge" grasping your girl friend’s hands. 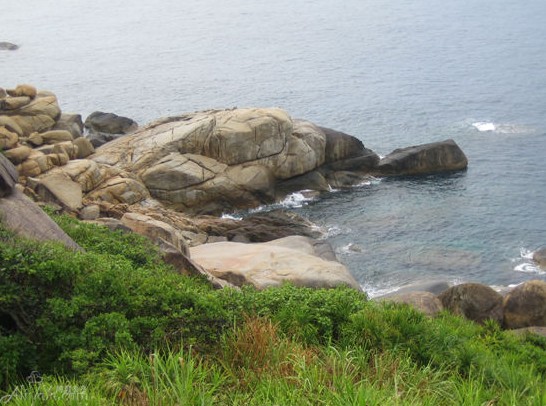 The Sunrise Rock is located at the southeastern cliff in Wuzhizhou Island. Standing on the Sunrise Rock, leaning against the azure ocean in breeze and gazing far into the distance, you can overlook the whole island and have a panoramic view toward the South China Sea.

At the foot of Sunrise Rock there are jagged rocks in grotesque shapes. Upon calm seas and gentle breezes, you may only witness the majestic stones in all its variety; while upon stormy sea and terrifying waves, you may experience our great nature’s magnificent scenery of shaking heaven and earth. Sunrise Rock is the most optimal site to observe sunrise. When the red sun initially gushes at the easternmost skyline, boundless sunglow would trigger all your joyfulness and at the same time those overwhelming billows would comfort all those frustrated hearts.

In the southeastern area of Wuzhizhou Island and exactly under the Sunrise Rock, there is a natural giant stone in the shape of a huge turtle whose head and shell are vivid and visible.

The most fantastic thing about the turtle is that a long strip rock above the sea level seats itself at the left front of the whole rocks and thus when submerged by sea water, it looks like that the turtle is thrashing water with its paws. The image is so dynamic and vivid that it looks like a giant turtle edging down upon the vast ocean and returning to its motherland. Then the sight spot got its meaningful name as "Gold Turtle Stretching forward to the Sea."

Lover Island consists of two giant stones that have witnessed thousand years of ebb and flow and now still stands there calmly face to face as if a couple in love. It is said that it was nominated in the name of a pair of deeply loved young couple who were turned into stones by irritated Dragon King. Now Lover Island has became one of the most attractive sights in Wuzhizhou Island and the best favored site for those lovers to whisper to each other and appreciate the rote of surf.

According to the record of Sanya’s county annals, long ago there were a fisherman and his three sons, who made their living by going fishing in the sea. One day they were hit by an unexpected hurricane and all fell into water. With a piece of shipboard in hands and confronting the struggle of life and death for several days, they were so hungry and thirsty. Fortunately they were carried by waves and landed at the beach of the Wuzhizhou Island. To their great surprise, they found a little pond adjacent to their landing site and thus they were saved. Consequently they settled down in the Island and successfully excavated a well at the landing site and then the well got its name as "Life Well." Ever since then the well has been providing fresh water to numerous fishermen who pass by it and go out for fishing.

SOURCE: yeschinatour.com
Read more:
Rare species of plants found at Wuzhizhou Island in Lingshui Bay, Sanya
Wuzhizhou Island, the best place for scuba diving in China
Editorial Message
This site contains materials from other clearly stated media sources for the purpose of discussion stimulation and content enrichment among our members only.
whatsonsanya.com does not necessarily endorse their views or the accuracy of their content. For copyright infringement issues please contact editor@whatsonsanya.com