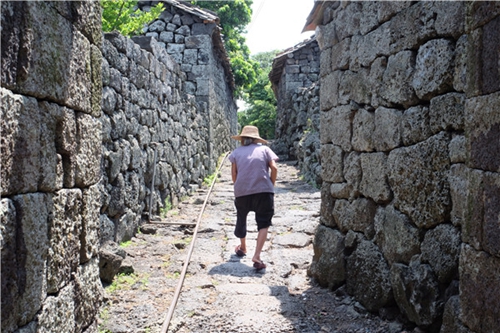 An old woman walks in an alley paved with lava stones in Sanqing village in Haikou, South China’s Hainan province, on June 9, 2015. [Photo by Huang Yiming/China Daily]
Situated in the Shishan town around 15 kilometers from the center of Haikou city in Hainan province, Sanqing village was built on the lava landscape among a volcano cluster formed thousand years ago.

Dating back to the Song Dynasty (1127-1279), the village itself has a history of over 800 year, featuring a unique volcanic stone culture. The whole village was almost completely built with lava stones and nothing else, from the village wall, houses, pavement, public toilets to tools.

The village has 125 households with over 500 registered headcounts. As young people move out of the village to look for jobs in the city, only a small number of villagers remind in the village, mainly the senior with their grandchildren.

At the same time, a new village with modern facilities was built nearby and many families have moved in for more a convenient lifestyle.

Even though most houses are now empty, the architectures of the village somehow remain intact. Local tourism administration and the village head believe the ancient village has a potential in tourism, and is developing the area into a tourist destination, which they believe will benefit the local people.

The ancient Sanqing village was included in the Chinese Traditional Village catalogue in 2014.