Image of the Sinus Iridum taken by Chang’e II.(Photo by Xinhua) 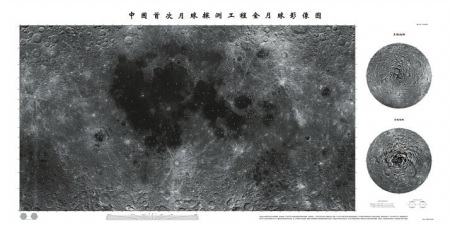 The complete map of the Moon taken by Chang’e I.(Photo by Xinhua)
The third phase of the Chang’e Project, China’s circumlunar exploration project, and the manned moon landing will be launched in Wenchang Launching Base, Southern China’s Hainan Province, according to an expert from the Chinese Academy of Science.
Ouyang Ziyuan, the chief scientist of the China’s circumlunar exploration project, said recently that during the third phase of the Chang’e Project, the lunar rover will drill samples from the lunar surface. Collected samples will be placed in the return capsule, which will launch automatically to leave the surface into lunar space to speed off from the Moon to Earth.
All samples will land safely on earth using a parachute after the capsule enters the atmosphere, the expert said.
China is now developing the new launch rocket Long March V for the third phase of the circumlunar exploration project, which needs larger and heavier devices.
The Long March V launch rocket can only be shipped to the newly-built launch site in Wenchang, the expert said.
It was reported that there were three opinions toward the manned lunar landing program in China. Some experts believed China can achieve the goal in 2020, while Ye Peijian, academician from the China Aerospace Science and Technology, argued the more appropriate time was 2025.
At the same time, some said that according to the 50-year long-term timetable of the Chinese Academy of Sciences, China is expected to achieve a manned lunar landing in 2030.
SOURCE: english.peopledaily.com.cn
Editorial Message
This site contains materials from other clearly stated media sources for the purpose of discussion stimulation and content enrichment among our members only.
whatsonsanya.com does not necessarily endorse their views or the accuracy of their content. For copyright infringement issues please contact editor@whatsonsanya.com

Next news: Ancient Mawangdui Tomb of Han Dynasty on diaplay in Haikou