Take a stroll down in historical Qilou Street in Haikou 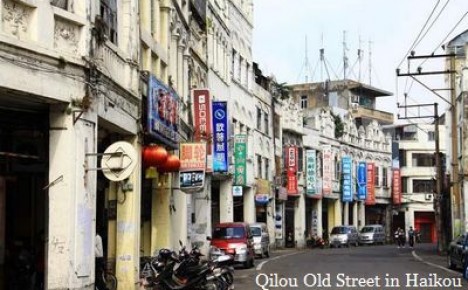 Located in Haikou, the capital of Hainan Province, the Historic Qilou Streets feature a stylish integration of European and Asian architecture, as well as Indian and Arabic influences. With delicately carved window frames and bricks, western-style Roman columns and arches, and various reliefs dotted under the roofs and beside the windows, the Qilou buildings form the city’s most exotic landscape, telling stories of how things used to be. 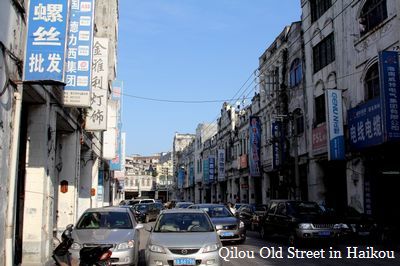 The origin of the Qilou Streets’ arcade style architecture can be traced back over 2,000 years to ancient Greece. In Asia, arcaded buildings made their debut in India. In order to shield themselves from the strong sunlight of India, British businessmen designed arcade-style buildings with both Western and Eastern elements. In the 18th century, this mixed architectural style was introduced to South East Asia, then to the coastal area of South East China.

In 1858, due to the signing of the Tianjin Treaty, Haikou opened its doors and became a commercial port. Later, the Haikou Custom was set up. Many countries like the U.K., France and Germany established consulates in Haikou, which gradually grew into a booming modern city and a commercial hub trading with South East Asia. At that time, its well-developed sea transportation network connected Haikou to Bangkok, Kuala Lumpur, Singapore, Saigon, Haiphong, Hong Kong, Xiamen, Taiwan, Guangzhou, Beihai and more. Travelling back and forth between Hainan and South East Asia or the coastal area of the mainland, Hainan businessmen brought architectural elements from different places back to Haikou, giving the city a Euro-Asian look. 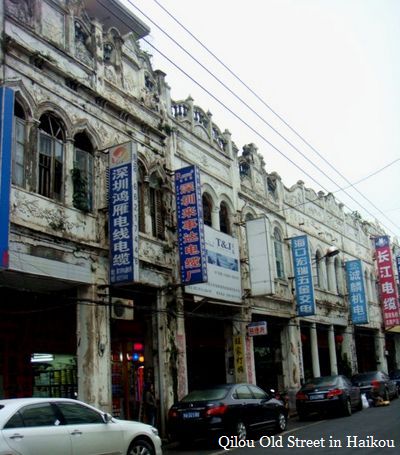 According to historical records, the first Qilou building in Haikou was built in 1894 at Sipailou Street, which is now called North Bo Ai Street. The Qilou building cluster initially came into being in 1820-1840. Standing between two and four stories in height, a Qilou building has its ground floor set back halfway into the building so that it can be used as a storefront, as well as taking shelter from rain and sunlight. The upper floors serve as the living quarters, and extend over the pavement supported by columns. The Qilou buildings in Haikou are characteristic of mixed European and Asian architectural styles. The top of each building is attached with a parapet, with one hole or two at the edge of the roof. The parapets are of European Baroque design. In addition to traditional relief patterns, Chinese elements are frequently applied, including dragons, phoenixes, pines, egrets, lotuses, plum blossoms, bamboo, chrysanthemums, and auspicious Chinese characters.

Qilou buildings now can principally be found on Zhongshan Road, South Xinhua Road, East Jiefang Road, Bo Ai Road and Deshengsha. In total, there are more than 200 Qilou buildings in Haikou. Historically, the street has housed consulates, churches, post offices, banks and chambers of commerce belonging to 13 different countries. Today, it remains Haikou’s business center whilst giving you a taste of the traditional life of Haikou. Salesmen in the shops, passers-by taking shelter from the rain, vendors having a short break, yelling hucksters, everybody enjoys the Qilou streets!

One of the 10 Historical and Cultural Streets of China, the Historic Qilou Streets of Haikou provide a living history lesson, an enjoyable stroll, and scenic views to all who visit.

Next news: Haikou Baishuitang Wetland Park to open to public at end of 2014