Updated: 2014-05-09 00:00:00
Hainan, an island off the southern coast of China, is touted by Chinese tourism officials as the “Hawaii of Asia”— a prestigious moniker to live up to.
At 34,000 square-kilometers, Hainan is 18 times larger than Jeju Island and offers stunning tropical scenery. But some tourists who prefer to go shopping, dine out, languish in fancy hotels and sample nightlife entertainment might feel slightly disappointed because much of Hainan’s charm comes from the fact that it is still largely underdeveloped.
However, this could all change rapidly — countless construction sites were seen during a 40-minute ride from Sanya Airport to a hotel in Haitang Bay, where most resorts are clustered. Many of the island’s best tourist attractions are near the Li and Miao Village, located on the border between Sanya City and Baoting County.
Li and Miao Village

The village, also called “Baoting Li and Miao Autonomous County,” is located in an area south of Hainan Island that is inhabited by minority tribes of Li and Miao.

Many of the houses in the village were created for tourists to view while the actual residences of the Li and Miao people remain off limits to travelers. 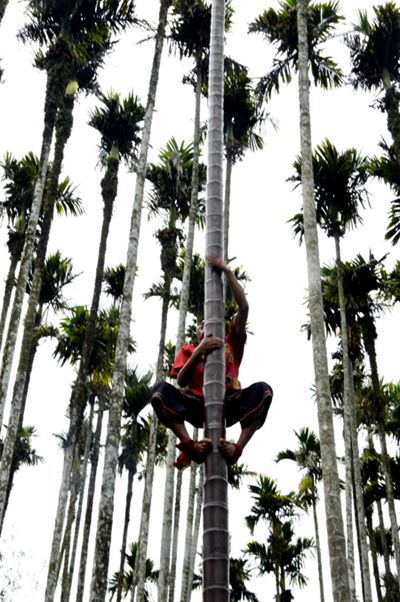 A man climbs up a betel nut tree at the Li and Miao village.

The re-created aboriginal huts exhibit the living style of the Li and Miao community and the Li and Miao Culture Museum exhibits clothing, artwork, and kitchenware of the people. Visitors can watch a musical performance that educates them about the traditional culture of the tribes. 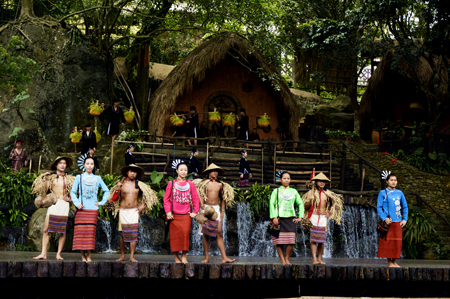 A musical performance educates tourists on the traditional culture of the Li and Miao people.

Tattoos are an interesting part of Li and Miao culture. In the past, women were tattooed with geometrical patterns across their bodies from as young as the ages of six or seven. This custom was banned by the Chinese government in the modern era, but the tattoos are still visible on the bodies of old women.

The Li people’s marriage customs are also unique. When a Li woman comes of age, she will choose a man based on his singing abilities. After proving this, his talent for tree climbing then becomes an important issue. The groom must climb a betel nut tree to retrieve nuts to take to the bride’s house as a token of respect.

Another major attraction in Hainan is Yanoda Rainforest, located 35 kilometers away from Sanya City.

The “Hainan Yanoda Rainforest Cultural Tourism Zone” encompasses five major rainforests. It is awkward to describe the 45 square-kilometer area as a rainforest as it was purposefully created as a tourist attraction. 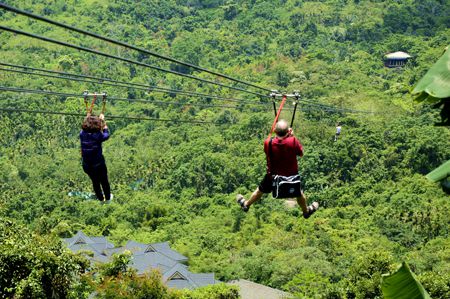 Tourists slide down a zip line to reach the other side of the forest at the Yanoda Rainforest Cultural Tourism Zone.
The entrance is similar to that of a theme park and all the employees, wearing green uniforms, shout “yanoda” and make a “V” with their fingers whenever they meet a visitor. “Yanoda” means “one, two, three” in Hainan dialect and is used as a greeting. 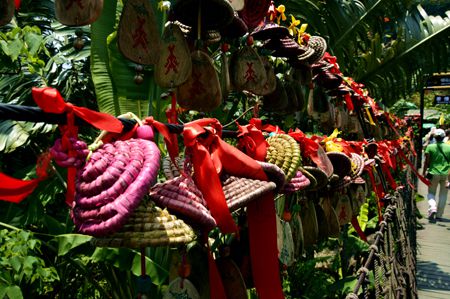 Charms are hung on the bridge at Yanoda Rainforest wishing blessings for family and friends.
After a 40-minute hike up the forest valley, visitors can enjoy an outdoor activity. To reach the other side of the forest, tourists must slide down a zip line over the vast valley beneath. The zip line stretches about 600 meters and visitors slide down relying on a single rope at a speed of about 30 kilometers per hour.

The tour of the forest is over by the time you cross the swinging bridge. There are charms hanging all over the bridge wishing good luck and blessings for families and friends. At the end of the bridge, Hainanese girls grab and pull your ears, a form of greeting in the local customs.

End of the Earth

No-one can say they have really seen Hainan unless they have visited the “End of the Earth” which is the most popular tourist destination among mainland Chinese visitors and a place that most resembles parts of Hawaii, helping the island to fulfill the expectations of its nickname.

The “Tianya Haijiao Scenic Spot,” located 23 kilometers southwest of Sanya, is more popularly called the “End of the Earth” because it is located furthest south from China. The name translates as “end of the skies and the corner of the sea.”

It is a popular tourist destination for lovers and a wedding photo destination for newly-weds because the island has a symbolic meaning as a place where lovers vow to “follow each other to the end of the earth.”

There is even a lover’s rock which resembles a heart shape. Two rocks lean against each other to form the heart-shaped formation and legend has it that two lovers fled for love and settled here and when they grew old, held each other to endure pain and sorrow before eventually transforming into rocks.
There are five rocks at Tianya Haijiao, designated as scenic spots, each with a different story and meaning.
The scenery at Tianya Haijiao was tropical indeed with huts and palm trees lined up along the white-sand beach. But it wasn’t also distinguishable from the scenery that can be found in other warm parts of the globe.
A trip to the island may be a refreshing getaway for mainland Chinese people but may not be worth the hassle for foreign tourists from other parts of Asia such as Korea who have to endure a six hour flight and a three hour layover at the airport for a transfer. Jeju Island may be the better option.
Other than the major attractions built to attract tourists, there weren’t many things to enjoy while traveling on the island. Maybe in five to 10 years, the island may find its shape and form as a global tourist destination, but it seems to have a long way to go to catch up with Hawaii.
SOURCE: Korea Times
Editorial Message
This site contains materials from other clearly stated media sources for the purpose of discussion stimulation and content enrichment among our members only.
whatsonsanya.com does not necessarily endorse their views or the accuracy of their content. For copyright infringement issues please contact editor@whatsonsanya.com