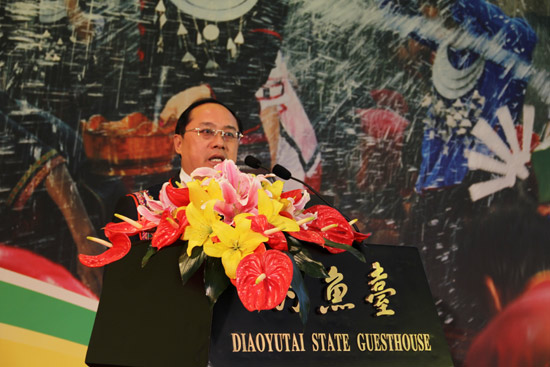 Baoting county magistrate Peng Jiadian speaks at the press conference for the promotion of Baoting tourism in Beijing on April 29, 2012. [Photo/chinadaily.com.cn] 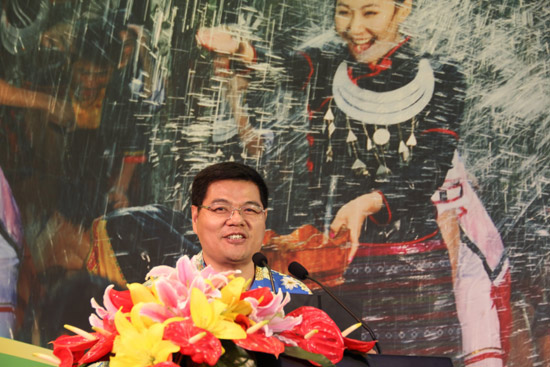 Baoting County party secretary Zheng Zuosheng speaks at the press conference for the promotion of Baoting tourism in Beijing on April 29, 2012. [Photo/chinadaily.com.cn]
The 2012 Hainan Seven Fairies Hot Spring Water Fun Day will be held from August 18 and 24 in Baoting Li and Miao Nationalities Autonomous County, with the theme of “Meet on Chinese Valentine’s Day, Enjoy Romantic Water Fun Day”.

Romance is the key word of this year’s festival. Compared with the previous years, the 2012 festival will have more activities to showcase the unique culture of the Li and Miao ethnic minority groups.

A cultural feast offering cuisine from both minority groups will be available throughout the festival.

China (Hainan) Seven Fairy Hot Spring Water Fun Day is the most influential tourism festival and tourism cultural heritage for ethnic groups in the Hainan province. It has become an important stage for promoting the culture of Li and Miao ethnic minority groups.

In 2012, the hot spring water festival aims to be more international by including activities such as an international photography contest.

Next news: 9 swimmers swim across Qiongzhou Strait, 5 succeed in crossing