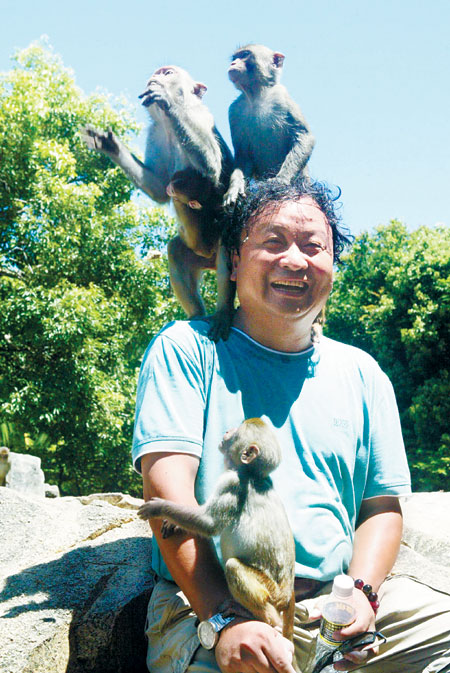 A tourist poses with a group of monkeys at Monkey Islet near Sanya, Hainan Island. 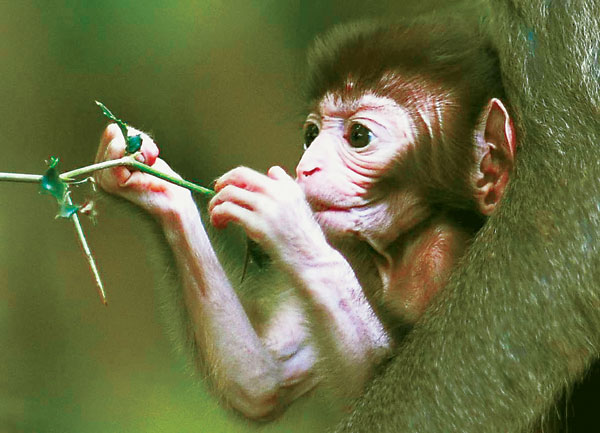 A baby monkey in the arms of its mom.

A trip to Monkey Islet in South Bay, near Sanya, Hainan Island, provides insight into our natural instincts, Raymond Zhou discovers in Hainan.

Wukong stole a pair of sunglasses from a tourist, who reported the theft, and he was sentenced to three days in jail. Wukong had one cellmate, but his cell was quite spacious at around 100 square meters. He did not have the freedom to hop around town, but his buddies made frequent visits and through the iron fence informed him of the goings-on in the community.

Wukong is a monkey. Actually I did not know his name, but he struck me overwhelmingly as Wukong, the legendary Monkey King. Then again, most of the monkeys at Monkey Islet seem to exhibit that quality.

Located at South Bay, around one hour from Sanya, the southernmost city in Hainan Island, Monkey Islet is a peninsula accessible to most tourists only by boats or a cable ride of 2,138 meters, that offers a bird’s-eye view of the bay, a fishing village and pristine forest.

Once you enter this monkey kingdom, you’ll instantly realize that, "Here monkeys are the masters, the staff their servants and the tourists no more than guests", in the words of Dai Guofu, general manager of the company that manages the monkey park.

Well, masters are not supposed to rob guests. That is why a domed iron fence is set up as a detention center for those who have done wrong. And boy, are they prone to misbehaving!

Chinese people grow up with the monkey legend from the classic fantasy novel Journey to the West. And here you can almost feel the magical tales come alive. The difference is, there is not just one monkey king, but one for each tribe. There are more than 20 tribes on the 10-square-km islet, and of these tribes, only four venture into the 5.6-hectare theme park – to play the role of the host, so to speak.

A journey to this monkey paradise is a study in comical rebelliousness. A trainer demonstrates the opposite effect of giving instructions. A monkey will do exactly what you do not want him to do. And if you hold up a whip to threaten him, he will steal the whip away instead of being submissive. You should watch one of the eight hilarious daily shows to witness the guilty pleasure of simian defiance.

However, some of them have indeed succumbed to Homo sapien orders. They stand guard at an entrance, holding banners and saluting passersby. It could be an honorable job, but pretty boring even for us humans.

Observing the dynamics within a monkey tribe, one cannot help thinking about the parallels with human society. Each tribe has a king, who surrounds himself with a harem of females as concubines and a phalanx of males as bodyguards. Each one has to fight for his or her own turf, but the hierarchy is always maintained.

Does that mean a mob of gangsters is actually closer to human nature than a community of equals who respect each other? The status of the king is not hereditary. Once every four years, a new king fights to the throne. But is that the root of democracy or still the law of the jungle?

The frequent fighting among the monkey tribes bodes ill for world peace among us humans. Some of these activities appear to provide tangible benefits while others seem to carry nothing that is worth exchanging scratches for – at least to my puny brain.

Of course, there are differences as well. Never should you attempt to pat a monkey on its head. (Many countries also see it as a taboo rather than a gesture of endearment.)

Monkeys have wrinkled faces while young, and gradually expand their countenance as they grow older, resulting in increasingly smoother skins. Now, that is something we humans could only go green with envy about. I guess only someone skilled in making pleated costumes may have a chance earning a living as a plastic surgeon in simian territory.

Apart from a lesson in animal behavior and inadvertent insights into social psychology, gems from such a tour also include ecology preservation. Despite the influx of 1 million visitors per year, which considerably enriches State coffers as well as local residents (90 percent of staff are local hires), the park is amazingly free from the heavy-handedness of the human touch, having integrated with the rest of the natural environment.

Great attention is given to details, such as the coconut shell-covered walls of public toilets. About the only sign of an "upgrade" is the so-called "five-star swimming pool" for the frolicking rhesus macaques, which is the scientific name for the species of monkey on this islet.

However, once in the simian realm, you do not need any familiarity with the Monkey King yarn to set your imagination spinning. They’ll make you laugh – by just being themselves. Now, how many humans are capable of that feat?

Previous news: Sanya expected to face a “huge correction” in its hotel market