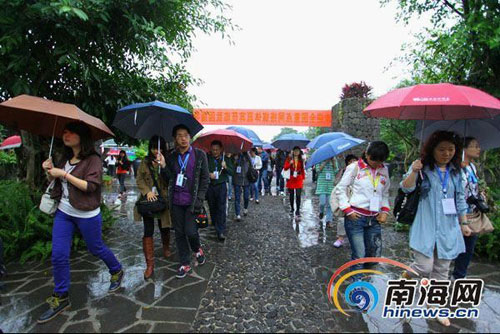 57 internet medias and 67 media representatives from across the country visited the Haikou Volcanic Tourist Site. 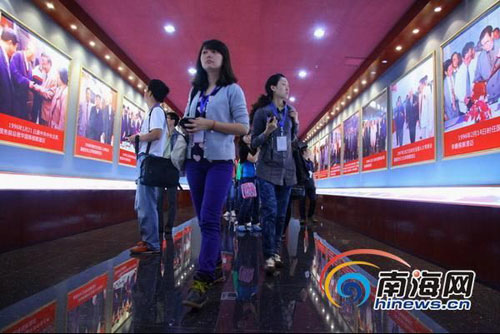 The Dongpo College is situated in the Zhonghe Town of Danzhou City, which is a state-level key unit of cultural relics protection, and have the title of "Famous Resort of South Sky", this is also the place where the famous literary giant in Beisong dynasty Su Dongpo lived in his three years of exile in Danzhou

Recently, the large reporting activity of "Pleasure Trip to the International Tourism Island — the 2011 Hainan Trip of the Key Internet Medias in China" which was sponsored by the CCP Hainan Promotion Department and Hainan Tourism Committee and executed by the Hinews.cn of Hainan Daily News Group just finished successfully. During the 27 reporting activities from November 21 to November 27, 57 internet medias and 67 media representatives from China’s portal websites, central and provincial key news websites and some internet medias from Hong Kong and Macao Districts undertook comprehensive reporting across Hainan Island, reported Hainan’s charming tropical seashore and tourism resources, as well as the achievements in constructing the International Tourism Island. 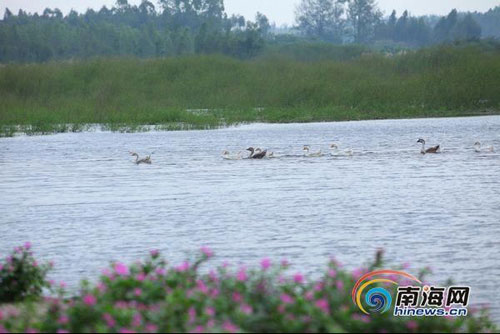 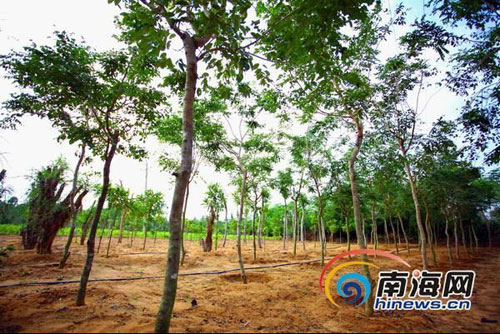 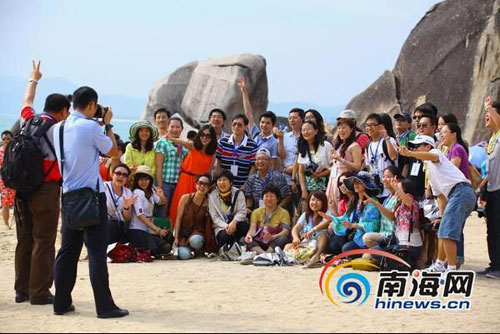 During the visiting of Hainan’s west line, the internet media reporters entered Chengmai’s featured town to taste the Fushan Coffee, and experienced the burning process of ancient Fuan kiln in the Hongkanling Clay Modeling Park; visited the Danzhou Dongpo College and entered the ancient salt pan that has over 1,200 years of salt manufacturing history; visited the Changjiang Haiwei Wetland Park, feeling the wonderful atmosphere of harmonious coexistence between human and nature; and visited the Dongfang Dalbergia Odorifera Root Carving Park, the Dongfang Rare Tree Cultivation Base and the Dongfang Dalbergia Odorifera Wood Carving Handcraft. 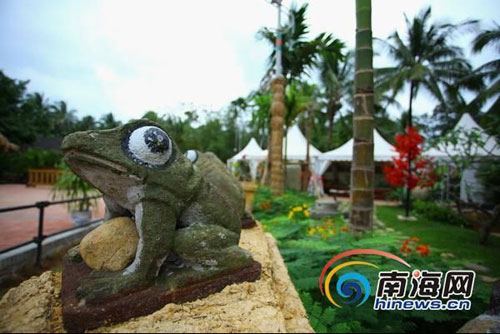 A small sculpture with ethnic feature in Shijin Village of Sandao Town in Baoting.

During the following part of the pleasure trip, the internet media reporters visited the Sanya Big and Small Rock Caves, the Tianya Haijiao tourist site, and entered the Sanya duty-free shops to enjoy duty-free shopping; went to Baoting to feel the Li and Miao cultures at Binglao Valley and the tropical scenes of Yanuoya, visited the Shijin Village of Sandao Town in Baoting which is the construction pilot of the "Big District and Small Town Plan"; in the Wanning Sun and Moon Bay, they felt the magnificent view of waves hitting the shore, wandered in the Wanning Xinglong Tropical Garden, and praised it as the tropical kingdom; they walked in the Tunchang Oil Painting Street, visited the Tunchang Culture Square and understood Tunchang’s plans of development and construction; entered the Qionghai Memorial Garden of the Red Detachment of Women, listened the legendary stories of the red detachment of women, visited the 102 years old red army soldier, felt the grandness of the Asia’s first talk platform —- the Boao Forum venue; visited the former residence of Song Qingling in Wenchang for a glimpse of the State Mother, and experienced the joy and happiness of bike-ridding at the Red Forest of Bamenwan.

According to incomplete statistics, by the noon of November 27, domestic and foreign medias have made 42 special news topics, 5 columns, 1,071 original news reports and published 359 thousand article in domestic and foreign medias. In the microblogs of Tecent and Sina, the number of topical reports and transfers for this activity exceeded 5,400 items. As known, the large reporting activity of "Pleasure Trip to the International Tourism Island —- the 2011 Hainan Trip of the Key Internet Medias in China" created an effect record nationwide for the activity form of "internet media trip", achieved astonishing effect in the promotion of Hainan’s overall tourism resources and the featured tourism in each city and county, its following effect will gradually take place.

Next news: Tour prices from Hainan to Hong Kong surge during Xmas season