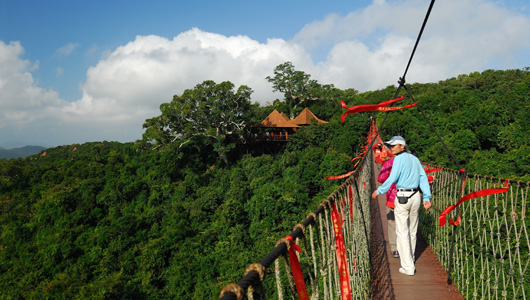 The southernmost part of China has beaches, forests, wildlife and good food. What else do you need?

Hainan Island, once a backwater where Chinese dissidents were sent into exile, has become a popular vacation destination because of its greenery, tropical weather and clean air. While this southernmost part of China draws tourists with its beaches, other attractions such as trails for hiking and biking, nature reserves and cultural parks mean that Hainan’s tourism scene has a respectable amount of diversity。

Because of its climate and landscapes, Hainan is often referred to as “China’s Hawaii” or “Hawaii of the Far East.” Resorts are springing up in response to the growing number of visitors from the mainland. The government of China has facilitated this growth by making Hainan into a Special Economic Zone (SEZ), with perks for businesses that invest or develop property on the island.

Despite this development, Hainan retains a kind of “island vibe.” People familiar with other parts of China will notice a laid-back, less-frenetic pace to life here. Trees thrive along the boulevards of the capital city of Haikou, and the rural landscapes start right at the city limits, unlike China’s other sprawling population centers. Likewise, the main resort town of Sanya has quiet, natural areas just off of the well-beaten tourist path.

What will the rapid pace of developments mean for Hainan’s currently green landscapes, leisurely pace of life and clean air? Time will tell. But for now, the island is one of China’s most accessible and greenest destinations.

See green
For many travelers, a Hainanese vacation does not start until they reach the beaches of Sanya. For many eco-tourists, however, a vacation on the island means leaving the crowded sands behind and heading into the wild highlands. Wuzhi Shan (Five Fingers Mountain), the highest peak on Hainan, is an ideal place to start. The trails are steep, and reaching the higher elevations requires some scrambling. Still, the trip can be completed in half a day or less. Most of the year, the mountain is more or less deserted, although local native people occasionally hold festivals on the summit.

A tourist-centered nature experience can be found in the Yanoda Rainforest Zone, a 17-square-mile tropical garden less than an hour’s drive from Sanya. Large collections of native plants and features like free shuttle bus service from Sanya and the use of electric vehicles inside the park give Yanoda a bit of green credibility. Monkey Island, a tourist attraction and animal sanctuary, is popular because of its namesake primates, though 100 other species of animals and several hundred species of native plants make the island more than just a tourist trap.

A less touristy option is the Dongzhai Harbor Mangrove Natural Reserve, just outside the capital city of Haikou. This reserve, which was the first of its kind in China, covers more than 8,000 acres of forest and mangrove wetlands. Dongzhai is a haven for birds, which frequent the wetlands year-round, with most species coming in the wintertime. Marine animals such as shrimp spawn amongst the mangroves during this time of year, providing an unending feast for avian species.

For people who want to cover more distance on their sightseeing excursions, bicycles are a viable option. Bike tours cover the inland areas such as the rural landscapes around the less-developed town of Wencheng, which is a popular base for hikers as well.

Urban greenspaces in Haikou provide a chance to appreciate some greenery without venturing too far from civilization. Jin Niu Ling Park, one of the major urban parks in the provincial capital, boasts dense, native vegetation intersected by footpaths. Wan Lu Park, on the other hand, is a massive public park with wide-open spaces that are normally used for playing badminton, flying kites or practicing tai chi.

Eat green
Seafood dominates Hainan’s cuisine. However, one of the most popular dishes, Wenchang chicken, is traditionally made with naturally raised chickens. Also, the climate on Hainan means that growing seasons are long and fresh food is available year-round.

As with other destinations in East Asia, sticking to a vegetarian diet is not difficult in this part of China. Many sit-down restaurants have non-meat options, and plenty of places specialize in vegetarian dishes. The soy, mushroom and vegetable-based dishes at the Nashan Temple, which is part of the tourist-centered Nashan Cultural Tourism Zone outside of Sanya, are worth a try for vegetarians and non-vegetarians alike.

The street food in Sanya and Haikou is doled out from sidewalk food carts and night market stalls. For some tourists, these street stalls, not the beaches and mountains, are the best attraction on the island. Basic snacks, like pineapple and coconut, are widely available. Other sidewalk specialties include skewered tofu and roasted eggplant.

Go green
Sanya and Haikou, the two main cities as far as tourists are concerned, are connected by a high-speed train. However, people intent on exploring beyond these two hubs are better off doing so by bus. The roads on Hainan are in good shape and traveling by bus is relatively straightforward.

Since most cities and towns are quite walk-able, getting behind the wheel of a rental car (or even climbing into a taxi) is not necessary. For people with more time and a decent level of fitness, bicycling is an option. Shops and guesthouses rent bikes for people who want to explore an area using pedal power after arriving there by bus or train.

Sleep green
Despite almost-constant news about major resort construction projects on the island, the green hotel scene is surprisingly widespread. Locally run guesthouses, green-minded hotels, and even a few eco-friendly resorts give environmentally conscious travelers a respectable amount of choices. The Baohua Harbor View Hotel is a larger hotel that has earned ISO 14001 status, meaning that it seeks to improve its energy conservation and lessen its environmental impact. It was the first hotel in Hainan to receive such designation.

On the other end of the size spectrum is the Bo’ao Inn Bed and Breakfast, an accessible small-scale sleeping spot in the quiet town of Bo’ao. Meanwhile the Haikou Banana Hostel is one of the more overtly environmentally conscious spots on the island. This hostel, which has both private and shared rooms, uses sustainable, local products such as bamboo throughout the property. It even stocks locally brewed liquor from a Wenchang-based distillery.

Hill tribes, such as the Li, Miao and Cham, have entered the tourism game, with most offering day-trip experiences. A handful of villages even offer home-stays.

Hainan is yet another face of the endlessly diverse Middle Kingdom: one that both nature lovers and mainstream tourists will find pleasant and accessible.

SOURCE: www.mnn.com
Editorial Message
This site contains materials from other clearly stated media sources for the purpose of discussion stimulation and content enrichment among our members only.
whatsonsanya.com does not necessarily endorse their views or the accuracy of their content. For copyright infringement issues please contact editor@whatsonsanya.com

Next news: Hainan official Jiang Dingzhi approved as one of 4 new national lawmakers