Hainan beaches to have Aussie life-guards 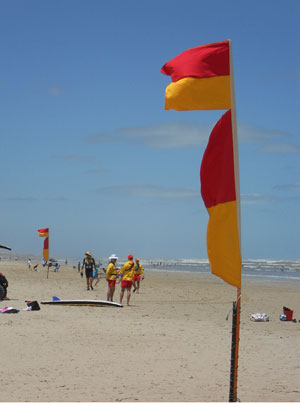 Beach flags to secure tourism to Hainan
Red and yellow flags will be flying-high across Hainan beaches over the coming year after island tourism leaders teamed up with Surf Life Saving Australia to establish safer coastal practises.

"Beaches in Australia have lifesavers and lifeguards that ensure tourists are safe whether it be domestic and international,” Mr Fraser said.

"We are now working with Hainan to introduce a similar scene on their beaches.”

Mr Fraser explained that work with the island would commence later this year or early next year, with travellers likely to see “red and yellow flags in Hainan in the near future”.

Hainan Provincial Tourism Development Commission deputy director-general Hu Yue Ming told guests at the Convention that the island is a great travel destination because it is “blessed” with climate that experience minor temperature fluctuations between 20-26 degrees and utilises its inherited traditions and modern feel to offer unique experiences.

According to Mr Ming, tourism into the island has increased over the year and for the first five months of the year has already witnessed a 36 percent increase in arrivals to 332,000.

SOURCE:  etravelblackboardasia
Editorial Message
This site contains materials from other clearly stated media sources for the purpose of discussion stimulation and content enrichment among our members only.
whatsonsanya.com does not necessarily endorse their views or the accuracy of their content. For copyright infringement issues please contact editor@whatsonsanya.com

Previous news: Sanya Phoenix Airport to be built into important int’l hub in south of China