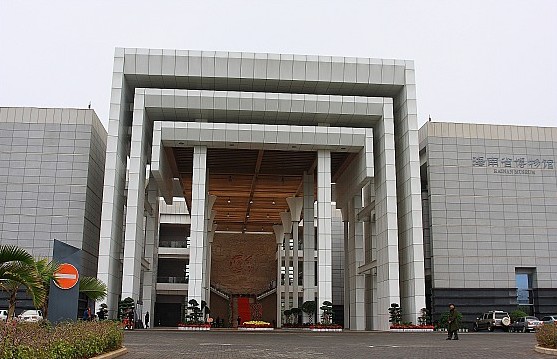 Hainan, China’s tropical island province in the South China Sea has a long history of human inhabitants that dates back 6,000 years. The Haikou Museum traces this history back to the Qing dynasty with its vast collection of art and historic artefacts.

The Museum was established in 1984 and relocated to Hainan Cultural Park in 2008 and attracts visitors from all over the island and Mainland China with its collection of over two million relics and cultural treasures.

Aside from being admired for it’s magnificent architecture, the museum in Hainan’s capital is the largest on the island, and holds a range of Chinese art including bronze sculptures, calligraphy, porcelain and paintings.

Close to five of Haikou’s official temples, the museum is built over spacious grounds with ten large exhibition halls dedicated to a particular style or period of Hainan art.

Of particular interest are the ancient bronze artefacts, including ritual vessels, weapons, horse harnesses and musical instruments. These are known throughout China for their high artistic skill, technical excellence and intricate symbolic patterns and forms.

A separate room in the museum holds antique Chinese paintings on silk and paper scrolls, made by Chinese masters of various eras who lived on the island.

One exhibition contains ceramics and porcelain that reflect different periods of the island’s history, presented amongst other artefacts including lacquers, bamboo, wood and bone carvings, sculptures and household items. Here visitors can also find a special section dedicated to embroideries and fabrics of the Ming and Qing dynasties, including some that date back to the 2nd millennium BC.

The Hainan Provincial Museum is located on Guoxing Road, adjacent to the Provincial Library and the Provincial Arts and Culture Centre. A tour of the museum can take a whole day. The Museum is open from 9-5 every day except Monday.

To get to the Hainan Provincial Museum, take bus 43, 45 or 33 from downtown Haikou, or take a taxi for less than CNY20 each way. From the Sanya city you can travel to Haikou in just 82 minutes on the new High Speed Bullet Train.

SOURCE: www.etravelblackboard.com
Editorial Message
This site contains materials from other clearly stated media sources for the purpose of discussion stimulation and content enrichment among our members only.
whatsonningbo.com does not necessarily endorse their views or the accuracy of their content. For copyright infringement issues please contact editor@whatsonsanya.com

Next news: Hainan Mining to supply 300,000mt of iron ore to Ningbo Steel each year