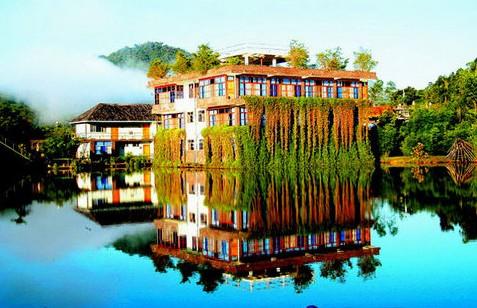 Jianfengling National Forest Park
The stunning Jianfengling tropical rainforest on Hainan Island has been described as one of the ten most beautiful forests in China by National Geographic Magazine.

The Jianfengling National Forest Park in the south-west of Hainan earned this rating in 2005 due to its ecological uniqueness. Surrounded by volcanic mountains and just inland of pristine coastline, the Park boasts an exquisite range of natural scenery, bursting with an abundance of plant and animal life.

Completely unspoiled by human intervention, the Jianfengling National Forest Park is a world completely separate from the excitement of Sanya, where nature rules in what scientists have dubbed one of the rare, ecological treasures of China.

The area is renowned for it’s variety of bird life, including rare peacocks, hawks, egrets and others, and its vast variety of plant life, which includes over 2,800 types of vascular plants including prehistoric fossil ferns. It is also home to the reclusive Cloud Leopard and the Black-crowned Gibbon, the latter only found in Hainan.

On a two-hour tour of the Jianfengling Park, the forest unfolds to reveal an abundance of luscious vegetation, ranging from tropical savanna to mountainous rainforest.

A wooden track lined with detailed descriptions of plant and animal species in the Park encourages visitors to learn about and respect the forest, while at the same time protecting the valuable ecosystem from damage by walking tracks.

While exploring the forest, visitors to the Jianfengling National Forest Park can indulge in native tropical fruits such as rambutan, banana, sweet coconut, passionflower and lychee. The one-day tour from Sanya requires about an hour travel each way, and costs RMB30 (US$4.50).

SOURCE: e Travel Blackboard
Read more:
Jianfengling Forest Park in Hainan, the Chinese ‘Amazon Rainforest’
Editorial Message
This site contains materials from other clearly stated media sources for the purpose of discussion stimulation and content enrichment among our members only.
whatsonningbo.com does not necessarily endorse their views or the accuracy of their content. For copyright infringement issues please contact editor@whatsonsanya.com