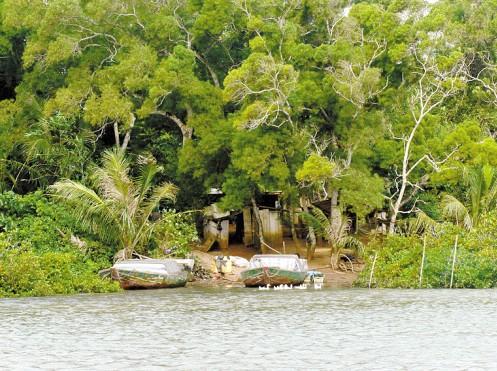 The Dongzhai Harbour, an area of roughly 4,000 square kilometers of tropical jungle abundant in Mangrove trees lies in the northeast of Hainan’s capital, Haikou City.

The Mangrove is a tropical tree that grows in swamps. The plant is under threat worldwide, a bad sign for the intricate ecology of land and sea-life that depend on it. Interlocking roots stop sediment from flowing out to see and diminish the erosive power of waves, so are crucial for land stability in the area. Scientists studying global warming have discovered that mangroves are highly effective carbon sinks, absorbing carbon dioxide and significantly reducing the amount of greenhouse gas. Because of the nourishment provided by the mangroves, the area is abundant in marine animals that feed and spawn amongst the plants.

The importance of the mangrove to the environment has been the focus of international research and preservation efforts, and with more than half of the world’s mangrove species located within the Dongzhai harbour, the Reserve is an important area both in China and worldwide.

Visitors are encouraged to explore the forests when the tide is low, learning about the abundant life that they sustain. But this is not the only reason to visit the Dongzhai Harbour. According to historical records, a disastrous earthquake struck the island at midnight on July 13th, 1605, completely submerging 72 villages deep within the sea.

Hundreds of years later these villages have become an incredible underwater site for the adventurous visitors who are keen to discover their extraordinary story. These villages occupy an area of over 100 square km, and can be seen sleeping eerily under the water particularly well in the months of May and June.

The Dongzhai Mangrove Natural Reserve is 20km from Haikou City, easily reached by a bus from the Quiongshan Minibus Station to Yanfeng Village, followed by a passenger tricycle to the Dongzhai Harbour. The Reserve is open to visitors between 08:00 and 17:50, and costs CNY 10.

SOURCE: Visithainan.com.au
Read more:
Visiting Dongzhaigang Mangrove Forest in Haikou
Go birdwatching in Dongzhai Harbor Mangrove Reserve, China’s biggest swamp
Editorial Message
This site contains materials from other clearly stated media sources for the purpose of discussion stimulation and content enrichment among our members only.
whatsonxiamen.com does not necessarily endorse their views or the accuracy of their content. For copyright infringement issues please contact editor@whatsonsanya.com

Next news: Yao Ming invited to attend Boao Forum for Asia in Hainan