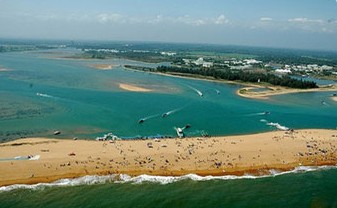 Boao Scenic Zone in Hainan
Boao/Boao Aquapolis is situated on the eastern coast of Hainan island, emerges at the meeting points of three famous river (Wanquan, Jiuqu, and Longgun), characterized by rivers, lakes, sea, sandy beach, mountains, hot spring, etc. It is also famous because of the Asia Forum every year. Before that, Boao is a small quiet village, which the people there is living depends on fishing hunting. 1.5 hours driving from Haikou Meilan Airport, and 2 hours driving from Sanya.

Boao at the outlet of the Wanquan River to the sea is also the confluence of the Longgun River and the Jiuqu River. Time and tide have created here some magnificent sandbanks and islets. This area is so far the best-preserved river exit to the sea in the world. The water, the beaches, the green forests on the seashore, the coconut palms swaying at sea breezes and the cooking smoke in nearby villages all contribute to making Boao a natural miracle.

The Legend of Boao

Long ago in Chinese legend, the youngest daughter of the Dragon King — Ao Qin of the South China Sea, gave birth to a son named Ao. Although its birth was accompanied by a splendid chance for prosperity, Ao looked strange with a dragon’s head, tortoise’s back and kylin’s tail.

This strange looking creature made the Dragon King angry and he wanted Ao and his mother to leave the island. The King blocked their return to the South China Sea by laying his jade belt across the entrance. This belt turned into the Jade Belt Beach that lies in front of Sofitel Boao today. 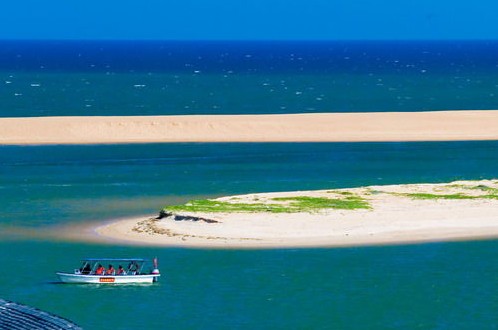 Jade Belt Beach in Boao, Hainan
Having failed to persuade her farther the Dragon King to accept Ao, the heartbroken daughter dragon changed herself into a mountain now called Longtan Ridge. Shocked at the loss of his mother, Ao was so angry that he busied himself by causing great hardship to the people living on Boao.

Hearing the news, the Goddess of Mercy, Guanyin, came to the island and after 72 battles subdued Ao, and transformed him into a dragon. Ao’s original body, a turtle with a dragon’s head, then became Dongyu Island, the site of Sofitel Boao. Aerial photographs of the island show it is shaped like a turtle. While it sounds like a tale from Middle Earth, whether true or not Boao is a remarkable yet sleepy corner of Hainan.

BFA Permanent Venue Scenery Area
BFA Permanent Venue Scenery Area is located on the Dongyu Island near the mouth of Wanquan River to the South China Sea that is the best-protected river mouth of the world. It integrates modern buildings, intelligence conference system, challenging golf course, attracting scenery and impressive legend. Being the permanent venue of BFA, the Island became world famous.
The Establishment Venue of BFA

Boao Scenic Zone
The Establishment Venue of BFA crouches in the center of Boao, facing the south sea to the east, surrounded by fresh atmosphere and temperature remaining 24℃ on average. From Haikou, Sanya to Boao, there are highways connecting each other. Transportation is quite convenient. It takes only half and an hour to arrive in Haikou and 2 hours to arrive in Sanya. Boao, not a small minor fish village anymore, becomes famous in the Asia and the world because being chosen as venue for Asia Forum and holding the annual conference of Asia Forum successfully. It would not let the world down.

Here, in the Boao Asia Forum Annual Conference Center, the Asia Forum was founded and the first session of annual conference was held. Just at that moment, Boao pulsated with the world together. Then it was received entitles such as "Top Ten Tourist Spots in Hainan", "Reference for Foreigners Attraction in Hainan" and "Model of Fantastic Scenic Spot in Hainan".

SOURCE: Sanya Web
Editorial Message
This site contains materials from other clearly stated media sources for the purpose of discussion stimulation and content enrichment among our members only.
whatsonsanya.com does not necessarily endorse their views or the accuracy of their content. For copyright infringement issues please contact editor@whatsonsanya.com

Previous news: Hainan to brace for this year’s strongest typhoon, Megi to add to flood woes