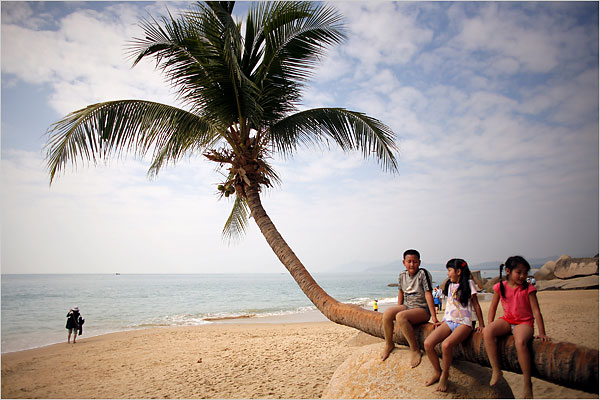 Tianya Haijiao is a beach depicted on the Chinese
two-yuan note and a popular attraction on Hainan Island.
THE sun is out, the sand gleaming white, the waves rolling toward shore in clean, regular sets. At the edge of this palm-fringed paradise, the sea is a pale, minty hue and empty of people. Launching my surfboard from the beach on Hainan Island, I paddle out to catch a wave.

Hainan Island has often been called the Chinese Hawaii, and indeed, it is the only tropical beach destination in China. With coasts on the South China Sea and the Gulf of Tonkin, about a 90-minute flight southwest of Hong Kong, this island, slightly bigger than Maryland, is attracting hordes of Chinese in the market for a little sun and fun.

The warm, sandy south coast around the port city of Sanya is experiencing a luxury hotel boom: Ritz-Carlton, Banyan Tree, Le Méridien and Mandarin Oriental have all opened resorts there in the last year, with Fairmont and Raffles properties also in the pipeline. Look around, and you’ll encounter weekend warriors from Beijing, Shanghai, Hong Kong and Guangzhou, all seeking to escape the crush of big-city life for a quiet stretch of beach and a frozen cocktail.

In the past, Hainan had a romantic, Wild West frontier air about it; as the southernmost point in China, it served for centuries as a place of banishment for criminals, exiled poets and political undesirables. Thirty minutes from Sanya is the famously scenic Tianya Haijiao, a k a the Edge of the Sky and the Rim of the Sea, a boulder-strewn beach depicted on the Chinese two-yuan note. Today, it is an immensely popular tourist attraction.

After Hainan separated from Guangdong to become its own province in 1988, a development boom was quickly followed by a bust that left many building projects on the island half-finished. In the last few years, Hainan has welcomed back investors and become a fashionable draw for Russian tourists looking to escape winter — entire blocks in Sanya have signs lettered in Russian for their benefit.

More recently, Hainan has attracted younger international travelers like Drew Aras and Catherine Forman, both 24 and from Melbourne, Australia. Mr. Aras, a physical therapist, first heard about the island while watching the Beijing Olympics, since it was where organizers obtained the 17,000 tons of sand for the Games’ beach volleyball courts.

"Usually, when we travel together, we negotiate a place that is both interesting to travel to and has the added bonus of offering some surf time for me," said Mr. Aras, who has been surfing since he was 5. "We thought we’d find a nice place to relax by the beach and maybe catch a few waves between cocktails."

What they found were uncrowded waves, cheap and delicious seafood and a quirky landscape that skipped from isolated coastline to spots jammed with mainland package tourists outfitted in matching head-to-toe Hawaiian prints.

The couple were introduced to the island by Brendan Sheridan of Surfing Hainan, a small local company that leads surfing expeditions and rents surfboards to visitors. Mr. Sheridan, 29, attended high school in Hong Kong and learned to surf while at the University of California, Santa Cruz. Two years ago, he made it his mission to bring surfing to the Chinese people.

"It’s the right time for the Chinese to get into surfing," Mr. Sheridan told me as we set out to surf at Riyuewan, a picturesque bay about an hour and a half northeast of Sanya. "There’s an emerging middle class that is finally learning how to spend their money and have some fun in life."

Most of his customers are foreigners, as many Chinese have an aversion to the sun — having a tan still denotes "farmer" — and don’t have much experience with the ocean. But Mr. Sheridan, who speaks Mandarin, finds that more and more Chinese are interested in the culture of surfing, including his two Chinese staff members, who are both in their 30s and have taken to the sport with a vengeance.

Around Hainan, the surf is up pretty much year round. Between April and September, waves tend to come from the south, while October to March brings a northeastern winter swell.

It can be somewhat expensive to be an independent traveler exploring the island beyond Sanya — public buses are infrequent, and a one-way taxi ride from Riyuewan to Sanya, for example, can run upwards of 300 yuan, about $ 43 at 7 yuan to the dollar. But Mr. Aras thought it added to the sense of adventure.

"It was refreshing to go somewhere not set up for Western tourists," he said. "My parents, who live in Hong Kong, already plan to go back to Hainan, and they know of other Aussie and Hong Kong expats who visit frequently. I don’t think it’ll take long for surfers to catch on."

Development is already fast and furious. The economic downturn may have lessened visitor numbers, but the hotels, with their glass-tiled pools and grand marble staircases, keep coming.

Along Yalong Bay, a lovely four-and-a-half-mile stretch of beach about 15 miles east of Sanya that was developed as a national resort district, the new Ritz-Carlton sits at the end of a long string of resorts that went up before it, including the Hilton, Marriott, Sheraton and Crowne Plaza. Overlooking the water, the Yalong Bay Golf Club, designed by Robert Trent Jones Jr., is shaped like a dragon’s claw and has hosted tournaments on the European and Asian Tours. There are now 16 courses on the island, with a couple more in the works.

The sheer numbers of Chinese mean that remote, once-unspoiled locations like Tianya Haijiao (on the two-yuan note), Wuzhi Shan (the "five finger mountain" in the center of Hainan), and Wuzhizhou (a tiny, white-sand island just offshore northeast of Yalong Bay) have been developed with Disney-like fervor to entertain the throngs of flamboyantly dressed tourists who want to view them on a package tour (ferries every 10 minutes, waterfall rides, horse treks). In these places, the Chinese Hawaii more closely resembles a Chinese Miami, full of shiny resorts and artificial attractions.

But stretches of green, mist-covered mountain slopes do remain. The warm, humid climate makes Hainan a bounty of tropical crops — the island is an important producer of pineapples, coconuts, mangoes, sugar cane, coffee and rubber trees. On a drive I took north out of Sanya last November, the countryside quickly retreated from apartment and hotel blocks to hillsides heavy with mango trees and rice paddies worked by teams of farmers and water buffalo.

Of all the new high-end resorts I visited, Le Méridien Shimei Bay, about an hour and a half northeast of Sanya’s airport, had the most authentic sense of place, with lush forests, a pristine, white sand beach and no other development around as yet, though an adjacent series of hotels is planned by Starwood Hotels and Resorts.

Changes are happening all over China, and Hainan Island exemplifies this moment. The boom in tourism there is exposing mainland travelers to a foreign beach culture in new and interesting ways.

One afternoon, when Mr. Sheridan took two young Chinese couples out for a surf lesson in Sanya, he got an unusual request from one of the women. "Can I take this umbrella with me onto the surfboard?" she asked. Mr. Sheridan fought off laughter and soberly told her that he didn’t think it was a good idea.

But he did admire her effort. He said, "Why not have it both ways?"

SOURCE: The New York Times
Editorial Message
This site contains materials from other clearly stated media sources for the purpose of discussion stimulation and content enrichment among our members only.
whatsonsanya.com does not necessarily endorse their views or the accuracy of their content. For copyright infringement issues please contact editor@whatsonsanya.com