In Hainan, coffee culture is a way of life 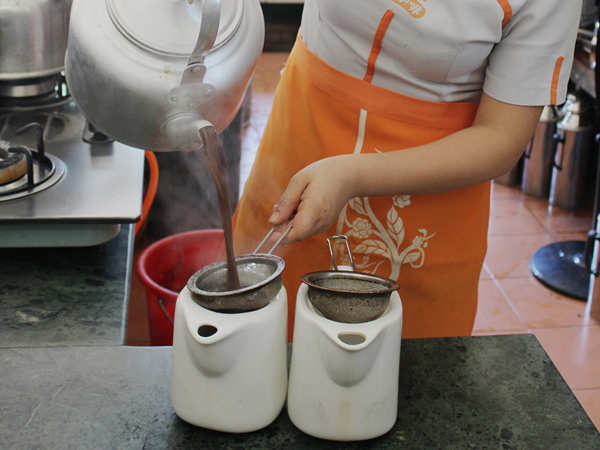 The locals in Hainan province brew coffee in big iron kettles and drain it through cotton fabric or iron filters.

In a land famous for its tea, Hainan island has a history of coffee which its residents claim tastes of earth, wind and fire. Mao Pengfei from China Features takes a sip.

In the 1960s, when China’s economy was strictly centrally planned, Hainan’s thousands of hectares of coffee orchards were State owned. No one could pick coffee cherries without permission – except the birds.

The birds ate the best coffee berries and their droppings would contain coffee beans, which Liang Dingwei’s uncle was happy to collect from the ground.

Those beans were rare in a time without free markets. They were washed, peeled, dried, roasted, ground and made into coffee that Liang can’t forget.

"Its fragrance was irresistible, but this kind of coffee is nowhere to be found today," says 53-year-old Liang, president of the Coffee Company of Xinglong Overseas Chinese Farm, which was founded in 1952 and claims to be China’s first State-owned coffee plant.

"No one has to collect beans from bird’s droppings for a cup of coffee anymore. We can buy coffee anytime, as it has become a part of our life," he says.

Hainan coffee, as the locals say, tastes of earth, wind and fire. The secret lies in the local environment and processing methods that have been passed down through generations.

Coffee arrived in Hainan in 1935 when Indonesian-Chinese Chen Xianzhang introduced robusta coffee to the Fushan area of Chengmai county.

With a latitude of 19 degrees north, Fushan has an annual average temperature of 23 C, sufficient sun, abundant rain and a red earth rich in minerals from volcanic ash, just like Hawaii, where kona coffee grows.

The robusta thrived in this environment, evolving into a coffee with a unique fragrance.

"We select the best local beans and process them in the traditional way. That’s why it tastes so special," says Xu Xiang, manager of the Fushan Coffee’s flagship shop in Fushan town.

Traditional processing methods introduced from Southeast Asia by returned overseas Chinese require coffee beans to be naturally dried on the ground, roasted with butter and sugar, and ground in a stone mill.

Xu, 41, still remembers how she and her five siblings and their parents roasted coffee beans when she was young.

"We set up big pots on the stoves. My elder sister and I kept turning the beans in the pots with shovels. My father would take a handful of beans and smell them from time to time and ask other children to add butter and brew syrup. When he felt the beans were ready, we put them into the syrup and fried them until they turned black and shiny."

The syrup seals in the fragrance of the wood-fired fried coffee beans, which is the secret of the sweet aftertaste.

Modern, Western-style coffee machines are too complicated and delicate to capture the flavor. The locals brew the coffee in big iron kettles and drain it through cotton fabric or iron filters.

A-lan has been working in the flagship Fushan Coffee shop for six years, and specializes in brewing coffee.

She puts the ground coffee into a big pot of boiling water, stirs and waits until the aroma seeps out. Usually this process takes less than a minute. She scoops the golden brown coffee into a pot where it settles like silk.

"Perfect," she says as she lifts the pot, sets up the filter and pours the freshly brewed coffee into a white china coffee pot.

Hainan coffee can be enjoyed with sugar or condensed milk, but the locals recommend it black with its fresh and earthy body. The last sip from the bottom of the cup can tantalize the taste buds with the flavor of earth, wind and fire.

David Mino, a member of Specialty Coffee Association of America, visited Hainan for a barista competition in June and was amazed at how coffee had become a local beverage in a country famous for tea.

"Hainan coffee is like the classic espresso, but stronger. Every true coffee lover should not miss it," Mino says.

Xinglong: Coffee in the blood

Long before Starbucks swept the world, people in Hainan were starting the day with a cup of coffee – not in coffee houses, but at street stalls, while eating fried rice noodles or steamed buns.

Since the 1950s more than 13,000 overseas Chinese from 21 different countries and regions have relocated to the region, introducing coffee customs and farming in Xinglong, a southeastern town of Hainan.

"We grew up with coffee, and it’s in our blood," says Liang Dingwei. "Xinglong coffee is full bodied, with a soft and sweet finish. You don’t even need milk."

Since China’s reform and opening-up in the 1980s, coffee has been available in all the markets. Unlike the fancy cafes of Beijing and Shanghai, where one cup can cost 30 yuan ($4.95), coffee has never been a luxury in Hainan.

"It’s our daily drink," says Wu Chunguang, 34, who runs the small restaurant Waxili in Xinglong, where fresh coffee costing only 3 yuan is always the most popular item on the menu.

The aroma of coffee drifts across this small town every morning.

Thousands of miles away from the busy metropolises of Beijing and Shanghai, life here is full of ease and leisure. The locals love to gather with friends and chat over coffee after work.

Wu’s father spent some time living in Indonesia, so Southeast Asian-style snacks are offered to complement the coffee.

"Coffee jelly is the best seller. Pumpkin cakes and tapioca cakes are also popular. I make them myself every morning from the recipe I learned from my father," Wu says. "The secret is the coconut cream. It’s all homemade."

Most guests are locals, but travelers are increasingly stopping by to sit in wooden armchairs under a tree, and while away the day with the aroma of coffee wafting on the breeze and sunshine slanting through the leaves.