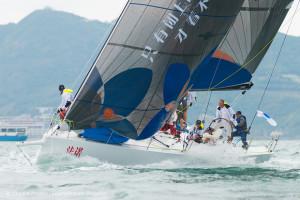 China’s premiere offshore racing event has been recording a constant growth since its inception, six years ago, with more and more international crews looking forward to take part. The 2015 edition is no different. The week long event, scheduled for March 21st to March 28th, has already attracted more than 45 entries. With some brand new boats and classes this year’s race promises to be as interesting and spectacular as ever.

Created in 2010 by the Chinese Yachting Association (CYA) and backed by the local government, the Round Hainan Regatta is a key part of the plan to place the island on the world sailing map and develop yachting-related business, as confirmed by the two highly successful Volvo Ocean Race stopovers in 2012 and, more recently, in February 2015. The RHNR regatta is now unanimously considered as one of China’s major international sailing events and the 2015 edition will further consolidate the island’s successful project to become China’s sailing capital. Famous for being the only Chinese tropical island with a tropical monsoon climate, Hainan isn’t just one of the country’s top vacation spots, but the surrounding waters and wind conditions and its world class marinas make it the ideal and natural venue for international sailing events.

For these reasons the Round Hainan Regatta has been experiencing a constant growth, as confirmed by this year’s record number of entries, over 45. Among them some "aficionados" who will come back to Sanya but also some new boats and classes. Like the brand new RHN Dubois50, a 50 footer especially designed for this race by renowned UK’s based naval cabinet Dubois, that promises to be a serious contender for the race line honours. Another rookie class is the attractive one-design sports boat Fareast 18R, with seven crews registered.

This year the fleet is divided into three groups, IRC 1/2, IRC 3/5 and the Fareast 18R class. The biggest boats on the starting line will be both Nautor’s Swan yachts, the 82′ Ubox and the 90′ GanGef, whilst the smallest will be a Jeanneau 32 footer flying the colours of hosting Sanya’s Serenity Marina.

The 2015 edition will start on March 21st with one or more in-port races for all the participating classes, followed by the official opening ceremony. On day 2 and 3 of the RHNR, the fleet will split with the big boats from IRC1&2 battling along the island’s west coast for their first offshore race from Sanya to Haikou while the other IRC classes and the Fareast 18R one-designs will have more in-port races in the bay. The Sanya stopover prize giving ceremony will close the first inshore part of the programme and say goodbye to the Fareast 18R class, that will conclude their participation to the sixth Round Hainan Regatta.

On the following days the two IRC divisions will take on the offshore section of the RHNR. The bigger boats will be confronted with a two-legs challenging route around the island with a stopover and a lay day in the island’s capital of Haikou, while the smaller ones will be sailing along the east coast between Sanya and Wanning, with a stop at Lingshui. The two fleets will then convene back in Sanya on March 28th for the closing act of the 2015 Round Hainan Regatta and the final prize-giving ceremony.

Next news: Visitors urged to be civilized at Sanya’s Linchun Forest Park