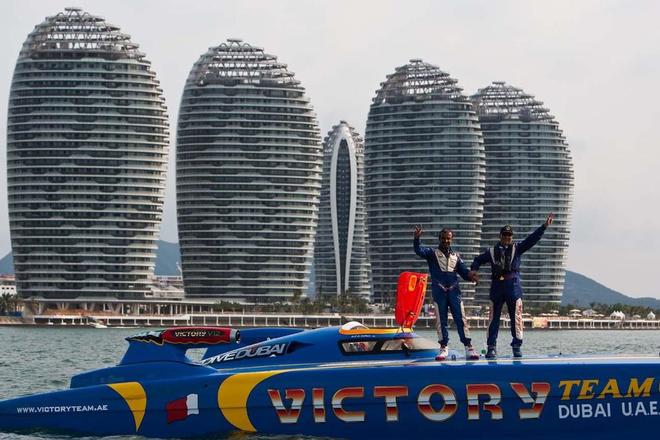 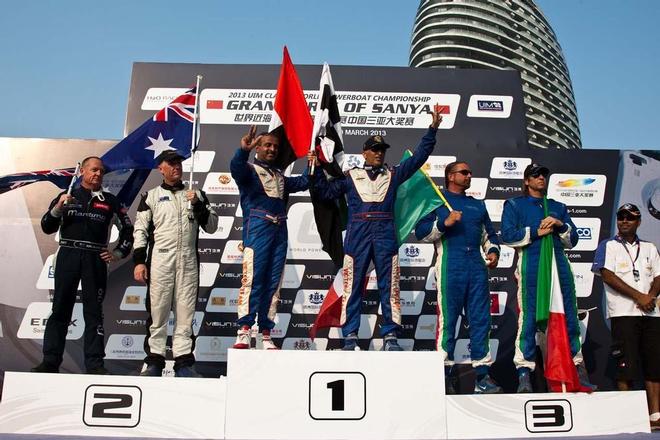 The podium – 2013 UIM Class-1 World Powerboat Championship Sanya Grand Prix – Simon Palfrader – copyright
At the Sanya Grand Prix, Arif Al Zaffain and Mohammed Al Marri wrapped up the perfect opening to their season, claiming the win in race 2 – to add to their victories in qualifying and race 1 completing their Sanya hat-trick. But Ugur Isik and Christian Zaborowski’s hopes of carrying the fight to Victory 3 and adding to their double podium seconds, ended in spectacular fashion when they barrel-rolled Zabo-Isiklar at the first turn.

Both pilots were unhurt but the severity of the damage to the boat became clearer once it had been towed back to the pits. ‘It’s hard to say what happened. Maybe we caught a wave,’ said throttleman, Christian Zaborowski. ‘It was a fast entry corner. I felt the boat lift and twist a little as we turned in and then it went over. This was a big crash. The damage is very bad all over the boat.’

Zabo-Isiklar’s dramatic exit brought out the red flag and forced a restart, with the race shortened to 14 laps.

The Victory duo again took control from the start and was unchallenged at the front throughout, systematically extending their lead lap-by-lap to eventually run out comfortable winners by 45-seconds to lead the Championship by 16-points.

Victory Australia’s Daren Nicholson and Ross Willaton, and LFFendi10’s Luca Formilli Fendi and Giovanni Carpitella picked-up where they left off yesterday, resuming their on water fight.

But this time the Australian duo were able to turn the tables on their Italian rivals, passing them on lap 3 to go on and take their second podium of the weekend.

Italy’s Tomaso Polli rounded off a busy and successful event that started on the wheel of Poliform and ended with two outings on the throttles of Team Abu Dhabi alongside Class 1 rookie, Faleh Al Mansoori.

The scratch pairing produced a more than impressive second outing, going one better than in race 1 to take a very respectable fourth place.

Giampaolo Montavoci’s afternoon hit trouble on lap 1, an electrical problem forcing Poliform to a crawl. But the Italian and his rookie driver, Salim Al Adidi stuck with it, Poliform kicked back into life, and they were able to go on and complete the race to finish in the points in fifth.

Newcomers Miles Jennings and Alfredo Amato went further than in race 1, but were unimpressed with the first corner hose down by Poliform which all but drowned their engine. The duo stayed out hoping to clear the problem and limped round for eight laps, falling one lap short of the 70% ruling that would have at least given them some well-deserved points.

Marit Stromoy and Pal Virik Nilsen’s already frustrating time in Sanya was compounded when they failed to make the start.

SOURCE: powerboat-world.com
Editorial Message
This site contains materials from other clearly stated media sources for the purpose of discussion stimulation and content enrichment among our members only.
whatsonsanya.com does not necessarily endorse their views or the accuracy of their content. For copyright infringement issues please contact editor@whatsonsanya.com

Next news: Hainan to build itself into an ecology province