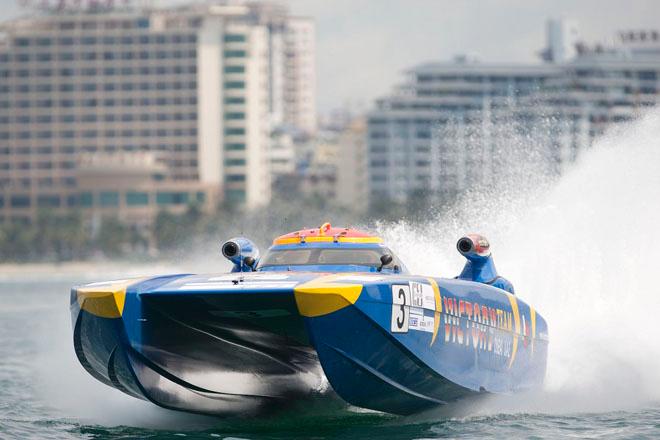 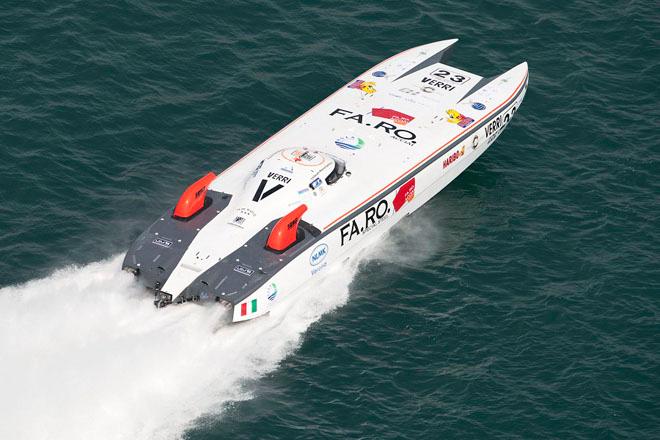 FA.RO Acciai – UIM Class 1 World Powerboat Championship Sanya Grand Prix – Simon Palfrader – copyright
In the Sanya Grand Prix qualifying session, Victory’s Arif Al Zaffain and Mohammed Al Marri dominated and will start race 1 in pole position. The defending World Champions threw down the gauntlet on their first flying lap, posting a time of 3mins 8.67s around the 4.93Nm circuit on Sanya Bay, and then went over four seconds quicker on their second run to post the fastest time of 3mins 4.58s and secure the pole.

The fight to be in the top three and gain the advantage of being in the group to take the inside turn gate at the first turn in race 1, proved a titanic fight between Zabo-Isiklar, Victory Australia and LFFendi10.

The trio traded times and swapped places throughout the two-hour session, with Ugur Isik and Christian Zaborowski coming out on top to post the second fastest time late in the session ahead of the all-Australian pairing of Darren Nicholson and Ross Willaton, whose impressive late charge up through the field knocked the LFFendi10 crew off the podium.

It was another impressive performance by Zabo Racing’s Turkish-Norwegian partnership who earlier in the day had traded times with the Victory 3 duo in official practice, and getting the better of them, posting the fastest short-lap time of 2mins 48.14s.

The late withdrawal from the event of Rashed Al Tayer and Majed Al Mansoori meant a very last minute reshuffle of drivers for Team Abu Dhabi and also Poliform, with Cass 1 debutant Falah Al Mansoori, racing for the first time in Class 1 and under a provisional super license, joined in the cockpit of the UAE boat by the vastly experienced Poliform throttleman Giampaolo Montavoci and going fifth fastest. But the switch of seats resulted in Italy’s Tomaso Polli having to sit out qualifying.

FA.RO ACCIAI posted the sixth quickest time of the session, but there was disappointment for Class 1 debutants Alfredo Amato and Miles Jennings in LFFendi8, stopping after just one lap, and for Visun Sanya’s Marit Stromoy and Pal Virik Nilsen who were forced back to the pits with technical problems without posting a time.

Edox Pole Position Championship – After Round 1: