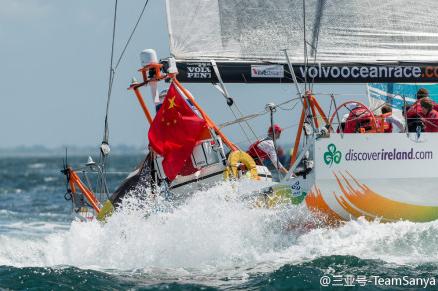 Team Sanya sets off on final leg
In stunning conditions, the 2011-12 Volvo Ocean Race fleet set off on the final leg to Galway today here in Lorient.

After another great start, Team Sanya and the fleet raced around a short course before heading off to the turning

The forecast after Belle Ile looks look like 20-30 knots where the fleet will surely stretch their legs and make fast tracks to Galway. The route is a mere 550 miles and there is talk of the fleet reaching Galway as early as 0300 on Tuesday morning.

Before departing, the fleet had a send off from a delegation all the way from Sanya, China – lead by Vice Chairman of Standing Committee of Sanya Municipal People’s Congress Liu Liling and Chariman of Sanya Women’s Federation, Du Liyin.

Mike Sanderson and his team also bid farewell to the new Mayor of Galway, Cllr Terry O’ Flaherty – the team, sponsored by Discover Ireland, are sailing towards their home port of Galway and look forward to spending a week there in just a couple of days!!