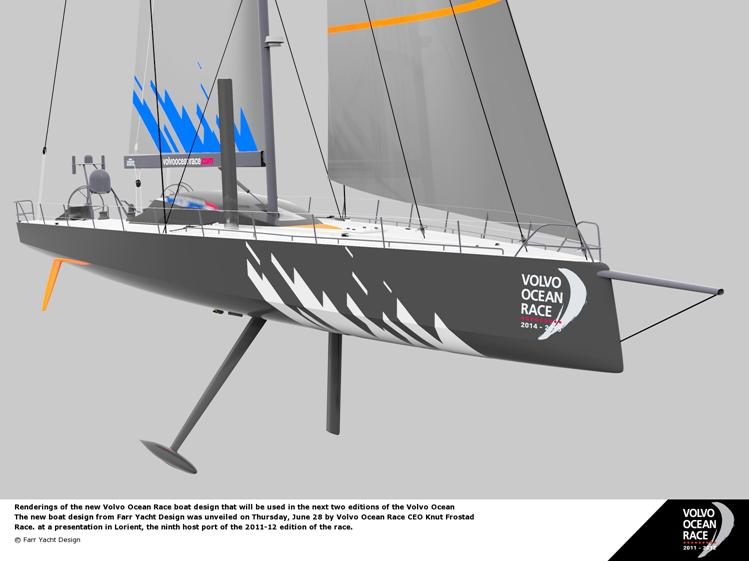 The Volvo Ocean Race has unveiled details of the high-performance new boat that will be used for the next two editions of the Race.

The plans detailed by Race CEO Knut Frostad at a presentation in Lorient on Thursday will significantly reduce the cost of mounting a competitive campaign and are designed to bring the size of the fleet to 8-10 boats in future editions.

The 65-foot (19.8-metre) monohull racing yacht will be strictly one-design. It will be designed by the United States-based Farr Yacht Design and constructed by a consortium of leading boatyards in the United Kingdom, France, Italy and Switzerland.

Under an agreement between Volvo Ocean Race and the consortium, a minimum of eight boats will be built to contest the next two races.

Work will begin in July and the first of the racing yachts in the new class will be completed by June 2013, well over a year before the start of the 12th edition of the Volvo Ocean Race, leaving from Alicante, Spain in the second half of 2014.

"This breathtaking new design, and the agreement to build at least eight yachts, will take the Volvo Ocean Race into an exciting new era," said Knut Frostad, the Race’s Chief Executive Officer.

"It represents another major milestone for a race that has never been afraid to move forward in our 39-year history. This move to a one-design gives us an enormous head start in our planning for the next two races and puts the Volvo Ocean Race in even better shape going forward."

Despite being five feet (1.5 metres) shorter, the new boat will be almost as fast as the Volvo Open 70s that are contesting the current race.

The boat will be designed and built with the latest video, satellite and content production facilities to further enhance the work being done in the unique Media Crew Member programme that has been in place since the 2008-09 race.

The agreement announced in Lorient has been made possible after Volvo Ocean Race S.L.U. secured financing that will underpin the process of designing and building the boats according to schedule.

The Volvo Ocean Race, which began life in 1973, is owned by Volvo Car Corporation and The Volvo Group, who together reaffirmed their open-ended commitment to the race at a news conference ahead of the start of the current edition in Alicante in November 2011.

"We at Volvo Cars are fully behind these initiatives, which we believe will secure the future of this great event on all levels but also stay faithful to the very basis of the Volvo Ocean Race as the sport’s premier offshore competition for the world’s leading sailors," said Stefan Jacoby, CEO of Volvo Car Corporation.

"Volvo Group believes the plans presented to us by Knut and his team will take the Volvo Ocean Race to the next level with an innovative boat design which keeps us at the forefront of ocean racing while giving us the best possible chance of building bigger fleets," Persson said. "I am delighted as CEO to confirm my absolute confidence that the Race is taking the best route to an even brighter future."

The boats will be sold by U.K.-based Green Marine Ltd, who will carry out the final assembly. MULTIPLAST in France, Persico S.p.A. in Italy and DECISION S.A. in Switzerland will manufacture different components.

"For us it’s a great honour and a great challenge to be involved in this project and a race that is part of our heritage,” said Marcel Müller, managing director of Green Marine. “It’s the opportunity to work together with some of the best professionals in the marine industry including the other boatyards and the designers. We’re ready to create something very special.”

The process will significantly reduce the barrier to competing in the Volvo Ocean Race and the cost of mounting a competitive campaign, which CEO Frostad said would be possible for less than 15 million euros.

The “ready to sail” cost of the boats, including sails for the pre-Race period and the Race itself, will be around 4.5 million euros, while further significant cost savings will be made possible by the pooling of resources.

"Our clear goal throughout the planning process for the next race has been to make it easier and less costly to mount a campaign in the Volvo Ocean Race," Frostad said. "This is a big step towards that goal.

"This new one-design is fantastic looking and will be ultra-reliable and great to race. We’re heading into a new era of this great race with a future that it’s more exciting and more secure."

Patrick Shaughnessy, President of Farr Yacht Design, said his team were well placed to take on the challenge of designing the new boat.

"We’re super enthusiastic about the challenge we have in front of us,” he said. “It’s a big challenge but I think we’re well suited to meet it, and we’re really excited to be part of it.

"We’ve been involved in the Volvo Ocean Race and the Whitbread Round the World Race for over 20 years so it’s a great honour to be part of what’s considered going forward.”

The six boats contesting the current edition of the Volvo Ocean Race are about to embark upon the ninth and final offshore leg, leaving Lorient on July 1. The race will finish on July 7 with the final in-port race in Galway, Ireland.