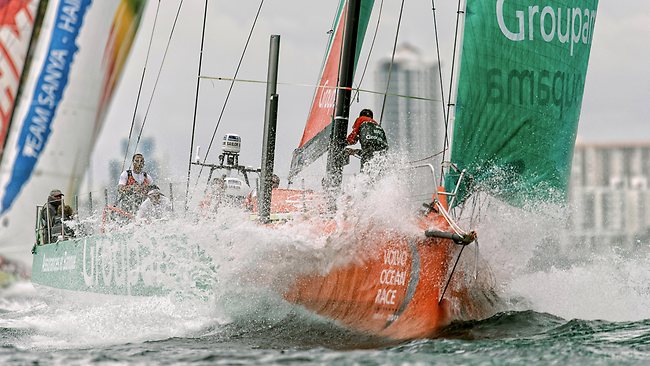 Leading the way: Groupama, skippered by Franck Cammas from France, power through the waves in Miami. Picture: Getty Images
GROUPAMA have built a big lead on leg seven of the Volvo Ocean Race after making the best use of Tropical Storm Alberto off the coast of Miami.

Groupama took a conservative approach to the storm and timed a turn east to perfection to put the ship in a strong position 24 hours into the Atlantic Ocean crossing from Miami to Lisbon.

American rivals Puma, winners of the last two legs, took a more northerly route but shortly after 2am AEAST were forced to tack back to the southeast to escape the worst of the weather.

While overall leaders Telefonica of Spain and the Team New Zealand-crewed Camper took a middle path that looked set to keep them safely on the fringes of the storm, Abu Dhabi and Sanya were forced to make a big detour to escape the worst.

The race for the overall title is extremely tight after more than six months of racing around the world in sailing’s longest and toughest test with only three offshore legs to go before the finish in Galway, Ireland in July.

Telefonica have a seven-point lead over Groupama with each offshore leg bringing 30 points to the winner, 25 for second and so on down to five points for sixth.

Camper and Puma, respectively 13 and 14 points behind the leaders, are also in strong contention.

With boat speeds approaching a massive 30 knots, the fleet could arrive in Portugal for the seventh-leg finish as early as May 30.