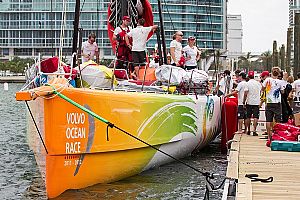 Sanya arrives from Savannah into Miami – Ian Roman pic
Team Sanya’s crew are back and warning the rest of the fleet that they’re ready to “mix it up” with them again after re-joining their rivals in the Miami docks on Saturday.

Sanderson also brought news of a different arrival, announcing that he and his wife Emma were expecting their third child. Emma was among dozens of family, friends and fans who lined the dock at the Downtown Miami Race Village for Sanya’s arrival at about 1500 local time, 1900 UTC.

Sanderson said that the crew had new found confidence in their second generation Volvo Open 70 after repairing a damaged rudder and a 1.5-metre crack in the hull that forced the team to retire from Leg 5.

The four-time Volvo competitor said that the 400 nautical mile sail from Savannah, where repairs were conducted, was the perfect way to “shakedown” the boat and crew.

With a week until the Portmiami In-Port Race on May 19, Sanderson said his team would now focus on making up for lost time on the water.

"Sanya’s very much ready to go,’’ he said. “The race sails are on. We used race sails down here and we did all our sail changes as though we were in the race.

"The big disadvantage is we are desperately short of sailing time as a crew. We were short before the race started and now we’ve missed two legs in a row. The fact of the matter is we’re down on race time.

"We have to manage it as a mix of trying to catch up while the others have forced stoppage, but we also have to be ready to race next weekend.”

Sanderson, the only skipper in the fleet to have previously skippered a Volvo winning boat, said his team were ready to again keep the others honest.

Despite being hampered by damage and repairs Sanderson remains focused on “mixing it with the big boys” and pushing for in-port and leg wins.

"If the weather gods play into our hands and the fleet’s mixed up enough then we’ll certainly sail as tough as we can, so we can be up near the front,’’ he said.

Sole Chinese crewman “Tiger” Teng Jiang He said he was itching to get back into racing after 50 days on land.

With Sanya now in better shape than ever before, Tiger said the crew could now focus on their crew work and achieving their goals.

"It feels good to steer the boat after another big repair on her,’’ he said. “I can’t say she is now a flawless boat, but we do know her better and have more confidence in her that she will help us finish the rest of the race.

"The boat’s now in great shape, which leaves us focusing on how we could improve as a crew and achieve our goals set for the race from the get-go.”

Helmsman/trimmer Ryan Houston will rejoin his team, having recovered from a sudden illness that forced him out of the race in Sanya, China.

"I’m much better,” he said. I thought it was going to take only a couple of weeks but it actually took a month. I’ve been back to the gym running and everything so I’m back in full strength now."

Next news: Man executed for killing, dismembering girlfriend in Sanya