Camper heads to Cape Horn ,Groupama closes in on 3rd in Leg 5

Six days after they suspended racing and headed to Puerto Montt in Chile, Chris Nicholson’s men on CAMPER with Emirates Team New Zealand were back in racing mode for the more than 2,500 nautical miles they still have to sail to the finish line in Itajaí.

CAMPER officially resumed racing at 0441 UTC after motoring through Chile’s waterways for more than 26 hours to get back to the position at which they suspended.

To complete the leg they must take on the feared Cape Horn, the most southerly tip of South America, one of the most dangerous places to sail in the world.

"It already feels colder here than we remember, and unfortunately for us it is only going to get colder until we eventually round Cape Horn and head north again to more tropical waters,” said CAMPER Media Crew Member Hamish Hooper.

"From what I learn from the guys on board this is now very late in the year to be rounding Cape Horn so hopefully we get lucky and into a nice weather window to take us down, around and up safely over the next few days.

"Right now the wind is very light, the swells are such that the boat bangs down off each wave.

"I am slowly getting used to the banging bow again. It wasn’t an enjoyable sound when it was weakened for the 10 days before we stopped in for repairs.

"But with each bang the boat sure feels stronger than it did when vibrations would reverberate right through its bones last week.”

CAMPER were forced to divert to Chile after discovering structural problems.

They are guaranteed at least 15 points for completing the leg following the retirement of Team Sanya and Abu Dhabi.

Meanwhile, Groupama were within 325 nautical miles of the finish, having resumed racing with a temporary rig on Saturday.

Franck Cammas’ team, down to seven men for the final stretch, were hitting speeds of up to 19 knots despite sailing with a rig made from the broken pieces of their mast.

"We are always keeping in mind not to ask too much to our rig,” said MCM Yann Riou.

Groupama are on course to pick up 20 points for finishing Leg 5 in third place, a result that will take them back up to second place, 20 points behind Team Telefónica.

Telefónica finished the leg as runners-up to PUMA Ocean Racing powered by BERG on Friday. 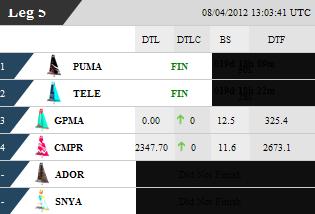