Team Sanya to turn back to NZ over leaking boat 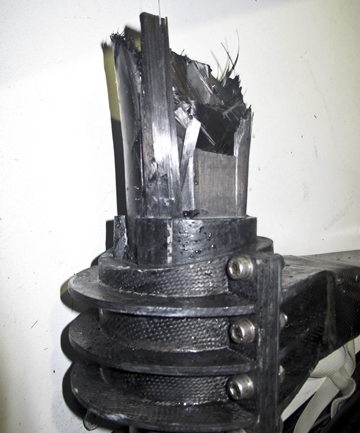 Team Sanya crew sealing the starboard rudder bearing after sustaining damage during leg 5 of the Volvo Ocean Race 2011-12, from Auckland, New Zealand to Itajai, Brazil.
A patched-up Team Sanya are weighing up whether to sail to the Chatham Islands, or Wellington, to repair their leaking round-the-world boat.

After saving their boat from sinking, a devastated Team Sanya have been left with no option but to pull out of the Southern Ocean leg of the Volvo Ocean Race and return to New Zealand with a broken starboard rudder and a holed hull.

The latest statement from the Chinese team, packed with Kiwi sailors, says: "Right now, the plan is to get north as soon as possible to get out of a building breeze. Then its four days to the Chatham Islands and around five days to Wellington. The plan is still up in the air, but as Mike [skipper Mike Sanderson] stated, our main priority is crew safety."

Sanya, the oldest boat in the fleet, was leading the charge south to Cape Horn when the accident happened around 9pm last night. Around three tonnes of water flooded into the aft compartment, forcing the crew into "preservation mode" to save the boat from sinking.

"The rudder snapped in between the boat and the deck which is just the worst thing that can happen because then it just leverages itself off the boat and leaves a pretty messy trail.

"We had to save the boat. We had the whole aft compartment full of water, about three to four tonnes, and it was pressing."

The crew toiled through the night to fix the hole, and then fitted emergency steering before turning the boat around and heading back to New Zealand.

Sanya had been powering along at speeds of around 25 knots at the head of the fleet when Sanderson, at the navigation station, heard a loud bang while.

"It is the second time we’ve heard water coming into this boat at that sort of pace, so it’s pretty scary,” he said. In Leg 1, the team tore a hole in their bow which threatened to sink the boat.

Back in port, the Sanya crew will get the damage repaired before deciding their fate in the remainder of this race.

"It will be what it will be," Sanderson says. "But we’ve just got to really focus on getting the guys back there safely and getting our boat back there so we can live to fight another day."

Meanwhile, Camper and Groupama have resumed a slugging match at the front of the fleet waiting to jump on to a Southern Ocean low carrying winds in excess of 40 knots.

The leading crews have since been busy stowing away valuables, ensuring essentials are within reach and checking their survival suits as they gain ground on the back of a low-pressure slingshot.

"The low has very strong, very violent, very cold winds from the deep south, so strong that they are likely to reach gale force,” Volvo meteorologist Gonzalo Infante says. "The boats will be going very fast, and depending on the sea state, we could see the 24-hour record smashed over the coming days."

Previous news: Sanya advances to 2nd place while others tack south in search of winds

Next news: Broken rudder sets Team Sanya back while leading the fleet