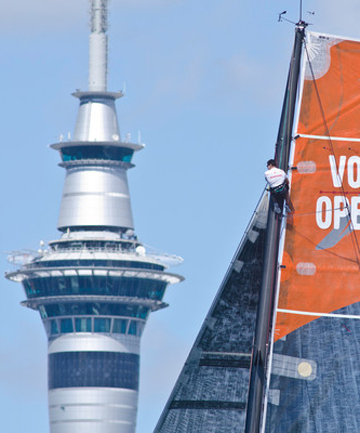 Team Sanya’s Jared Henderson looks for wind during Friday’s pro-am race.Relevant offers
The oldest boat in the fleet was the quickest inside the Waitemata Harbour in today’s Volvo Ocean Pro-am series in Auckland.

After the first two races were canned through lack of wind, Team Sanya and their experienced Kiwi crew won the only race of the day on board their 2008-09 generation Volvo Open 70.

Despite a sunny autumn day, which drew out a flotilla of spectator craft, the first two races were abandoned when the sea breeze failed to arrive until 2pm.

When racing finally began, Team Sanya grabbed the advantage at the committee boat end of the startline, with Puma to windward second across across the line. The Chinese boat led around the top mark of the one-lap course, followed by Ken Read’s Puma, and little changed on the run back to the finishline.

Abu Dhabi Racing pulled out of the pro-am in favour of lifting out their rig to prepare for tomorrow’s in-port race and Sunday’s ocean leg start.

Skipper Ian Walker said he didn’t want to take any chances diving into the Southern Ocean.

"Yesterday we found something we weren’t quite happy with so we have investigated it overnight, talked to the rigging manufacturer back in Europe and made the decision first thing this morning to take the mast down and do a bit of preventative work," he said. "I’m fully confident we can make the repair and it’s not something that’s going to affect our rig tune."

Tomorrow’s in-port race, on a course between North Head and the Harbour Bridge, starts at 2pm, with east-northeasterlies of 10-15 knots expected to increase to 17 knots. Twenty-one points are up for grabs towards the Volvo Ocean Race tally.