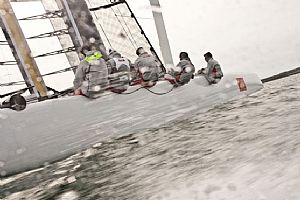 China team is heading to a new base – Gilles Martin-Raget pic
China Team, the exclusive Chinese challenger for the America’s Cup 34 Sailing regatta to take place in San Francisco in the summer of 2013, is delighted to announce that it will set up a training base in Sanya, at the Serenity Marina, which will host the team’s bats and sailing requirements for upcoming training.

China Team is thrilled to have a home at Serenity Marina. Thierry Barot, CEO of China Team, says “Serenity Marina is the first world class marina in China and has all the requirements that China Team needs to be able to train both the international sailors as well as the Chinese sailors, whom we are in the process of recruiting.

"China Team has already received the two Ventilo M2 boats that will be used to train the crew before the next America’s Cup World Series in Naples. Sanya is the ideal location for China Team training needs, with its tropical weather and idea sailing conditions all year round.”

Two Ventilo M2 catamarans have been purchased by China Team and will be arriving at the Serenity Marina shortly to train all crew prior to racing. These boats have been modified to ensure that they fit within the America’s Cup requirements that they do not exceed the 10 meter length overall.

Gerard Houa, Managing Director of Sanya Serenity Marina explains “Serenity Marina, with its world-class facilities, is the perfect marina to welcome and host China Team, the Chinese challenger for the America’s Cup.

"Sanya is the yachting destination of China, and Serenity Marina is uniquely positioned to become the Marina for yachting in Sanya. It is completely equipped to handle all yachting needs, and with our 100-ton capacity travel lift, we will also be able to accommodate the larger training boats that China Team will be using for training the Chinese athletes.”

China Team’s international crew will be training in Sanya from March 14 to 29, before heading to Naples for the upcoming America’s Cup World Series, to compete against the 9 other teams which represent the challengers and the defender of the America’s Cup.

Five years after China entered the America’s Cup race for the first time it is back in the competition with China Team under the leadership of chairman, Wang Chaoyong, and led by the 25 year America Cup veteran Thierry Barot.

This new challenger team will feature mainly Chinese sailors, on a China-built boat.