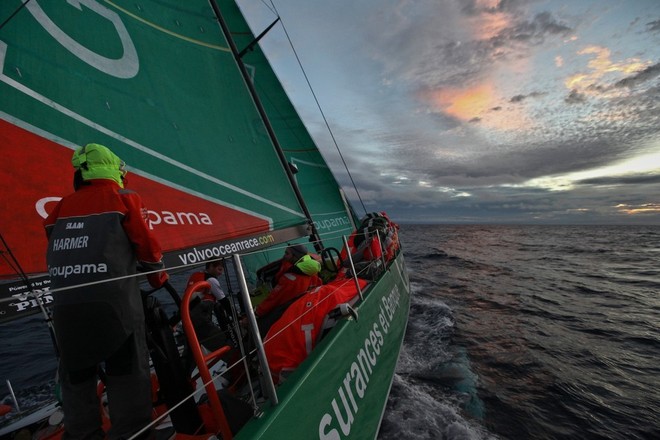 Franck Cammas’ team continue to make steady gains on every yacht in the fleet clocking up 428 nautical miles in the past 24 hours, edging close to the 478 nm that scored them the Leg 2 IWC Schauffhausen Speed Record Challenge trophy.

Despite holding pole position Groupama 4 skipper Cammas knows that the next 24 hours are crucial, and reaching the trades is key to getting across the Doldrums unscathed.

‘For now we have to get into the trades tomorrow night and then maybe one day after we have to decide exactly where we go in the Doldrums,’’ he said.

‘Nothing is decided in this leg for sure. We don’t know what is going to happen at the end of the leg on the approach to Auckland.’

Abu Dhabi skipper Ian Walker warned that his team are far from out of the running with just under 4,000 nm of racecourse remaining.

‘What’s interesting right now is the balance between what you do short term to make yourself look good on the leader board and get close to Auckland, or whether you keep investing in the east to set yourself up for the longer term,’’ he said.

‘We’re one of the more eastern boats now, following Groupama’s track. It’s a little bit scary for us, it looks like we’re losing miles to Telefónica, Camper and Sanya.

‘But in reality we’re setting ourselves up hundreds of miles to the east, which hopefully will pay back but probably not for a week’s time, by which time you don’t really know the weather situation.’

Next news: 2012 World Snooker Haikou Open kicks off on Monday, to last until March 4