Out of Luzon Strait, Telefónica emerges as leader again 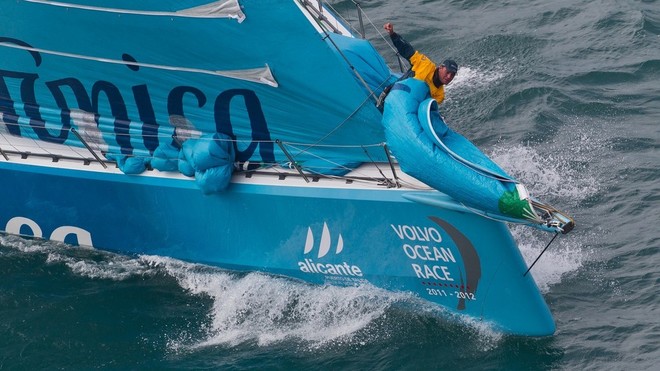 ‘Telefonica in action.’ Ian Roman/Volvo Ocean Race©
In the Volvo Ocean Race, the Camper team led the fleet through the Luzon Strait, passing within a mile of the lighthouse marking the southern tip of Taiwan at 1830 UTC tonight. Groupama 4 (Franck Cammas/FRA) and Telefónica (Iker Martínez/ESP) followed. But, at 2200 UTC tonight, a new leader had emerged and Telefónica was in back their customary position as leader of the pack.

The shake up on the leaderboard is due to decisions taken immediately after clearing the Luzon Strait. Camper chose the high road north, while Telefónica is 45 nautical miles to their south. Between the two is Groupama 4. Puma’s Mar Mostro (Ken Read/USA) rounded the point in fourth place with Ian Walker and Abu Dhabi Ocean Racing less than a mile behind. At the last position report Team Sanya still had four miles to go.

Progress through the Luzon Strait was slow but at least possible and not the total glass off that the crews feared and speeds have been building out in the Philippine Sea. For the past three hours, Camper has averaged 19.3 knots, while those further south have been sailing progressively slower.

‘The next part of the leg is about how far east you can get before you dive south towards the Equator,’ explained Team Sanya’s skipper Mike Sanderson/NZL. ‘How much distance to the finish are you prepared to pay to sail east and how far does that take you?’

Like the other five teams, Sanderson and his men had hoped the sail east would be relatively cheap enabling them to then sail with much nicer angles down to the trade winds, but this is not going to be easy. ‘At the moment, it’s looking like it’s going to be too hard to get east and it’s going to give the fleet a very tight angle to the trades, which means quite a few more days upwind or tight reaching,’ he said.

On board Puma’s Mar Mostro, the mood has brightened as they climb two places tonight. Read is upbeat: ‘A lot can happen yet. We’re staying positive. There’s nobody on board who is down right now. We don’t get points for being 500 miles into a leg, we get them at the finish last time I checked. We’ll be fine,’ he said.

Previous news: Sanya in 3rd position after 3 days of sailing on Leg 4 of the VOR