VOR: Gale-force winds set to make the start of leg 4 the toughest 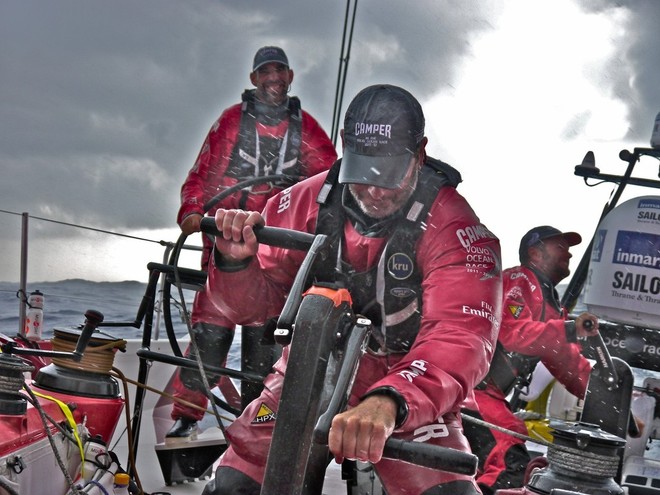 ‘The weather conditions forming in the South China Sea at the moment will definitely provide the teams with the most challenging start to a leg so far,’ Infante said.

‘Conditions will be very dangerous, pushing man and boat close to the extreme.’

As is typical at this time of year, a monsoon is currently building to the north of Taiwan and by Saturday will have filled the whole of the South China Sea with north easterly winds of between 35 and 40 knots.

Although certainly testing, wind speed is not the issue, Infante explained. The real problem will be the sea state.

‘This means the teams have no option to escape the big waves by heading north.’

With no escape route the crews will have no choice but to batten down the hatches and face whatever the weather gods throw at them as they punch east towards the Luzon Strait, the body of water separating Taiwan and the Philippine island of Luzon.

A low pressure system forming to the east of the Philippines is unlikely to develop into a tropical cyclone – but could help increase wind speed and wave height.

‘Ultimately the teams will have to go into survival mode to make it through the South China Sea unscathed.’

Thanks to the mountain range protecting Sanya Bay from the north easterly monsoon winds, conditions for Saturday’s Sanya Haitang Bay In-Port Race should be perfect with decent breeze and flat seas.

‘Offshore it will be a very different story,’ Infante said. ‘Race Control is monitoring the situation very closely with weather updates every 30 minutes.

‘Models predict the monsoon surge will be fully developed by Friday and will last until at least Tuesday. It is clear the conditions for the start of Leg 4 will be very rough, but it’s not clear how long the conditions will remain.’

Next news: Chang’an Ford to launch next generation of Focus in Haikou