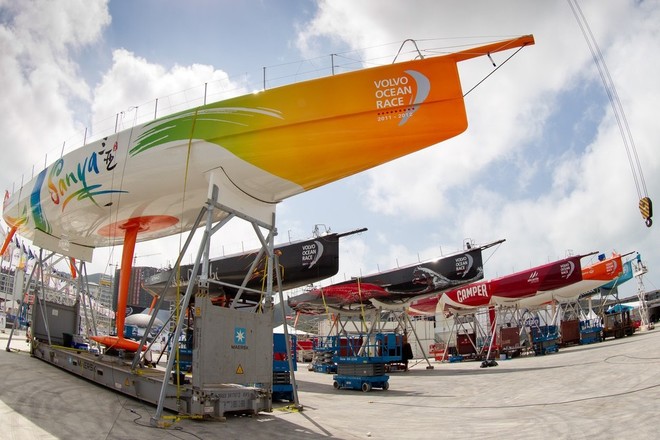 ‘Shore teams start work on making sure the boats are ready for the In-Port Race in the Sanya race village, during the Volvo Ocean Race 2011-12.’ Ian Roman/Volvo Ocean Race
Sanya will be back in the water in her home bay within a week after her first real shakedown for almost two months.

Skipper, and former Volvo Ocean Race winner, Mike Sanderson and his crew are staying in Sanya, China for the entire stopover, using every second at their home port to recoup, repair and improve.

It is the first opportunity the team have had to really service the boat, Sanderson said, having rebuilt the bow at Cape Town after a collision in Leg 1 and replaced their rigging at Madagascar after a failure in Leg 2.

Despite having to repair the pod, a structure supporting two winches that broke 48-hours from the finish, the shore crew have plans to make improvements to help their team come back fighting Sanderson said.

‘I think the biggest reason for this being the turning point is that we can get back on track,’’ he said. ‘Back to how it’s supposed to be, back to racing the boat and being a serious contender to rock the big boys.’

‘After the work we just did on the bow in Cape Town, this is tiny in comparison,’ he said.

Sanderson is excited at the prospect of his shore crew, including riggers Robin Hilton and Frano Tregaskis, finally getting a chance to use their expertise for improvements, not just repairs.

‘Finally we can get the whole thing on track,’’ he said. ‘In all the pre-race planning you do you talk about strategy for stopovers, what you’re going to do with the time and how you deal with it all.

‘Now we actually get to use that planning, we really get to play our game. We’re here with a strategy and an idea how to get better, so now the wheels can be set in motion.’

Previous news: Telefonica lifted off the water in Sanya, restored into top forms

Next news: Super Bowl becomes available on Hainan-Sports, according to NFL China