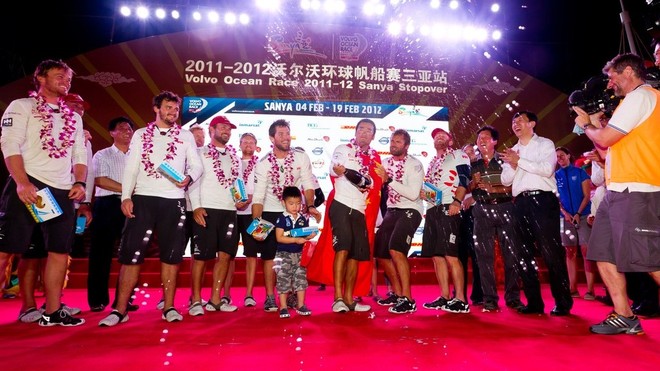 ‘Teng Jiang He sprays champagne on stage, after Team Sanya, skippered by Mike Sanderson from New Zealand finish sixth on leg 3 of the Volvo Ocean Race 2011-12’ 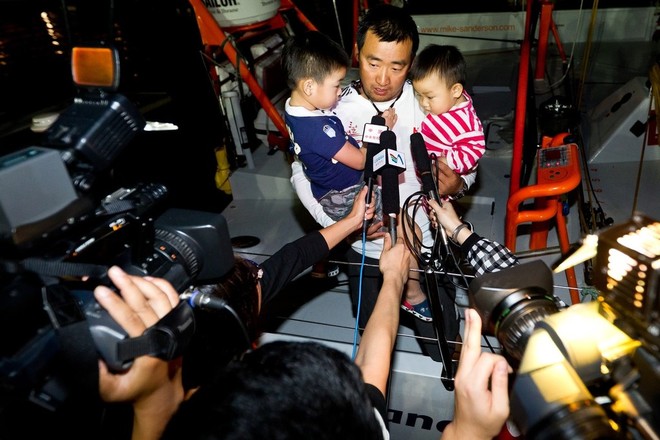 Teng Jiang He is interviewed on the dock. Team Sanya, skippered by Mike Sanderson from New Zealand finish sixth on leg 3 of the Volvo Ocean Race 2011-12 – Ian Roman/Volvo Ocean Race 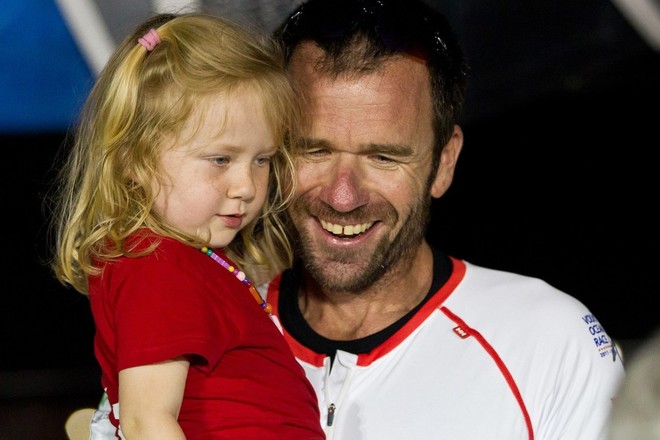 Firecrackers sounded as the exhausted team, including the first Chinese sailor to compete in the race Teng ‘Tiger’ Jiang He, stepped ashore for hugs, kisses and cheers from friends, family and well-wishers at Sanya Serenity Marina.

The 37-year-old entrepreneur, who started sailing only two years ago, was greeted with open arms by his wife and two sons, plus his extended family, in an emotional dockside reunion.

Earlier, skipper Mike Sanderson handed the wheel to his Chinese team mate for him to steer Team Sanya across the finish line in his home country.

Tiger said that moment had been a unique and emotional experience and confessed to being lost for words at the sight of his countrymen’s turnout.

‘We’re all very happy to be home to my motherland, especially in time for the Chinese traditional New Year,’ said Tiger. ‘Tomorrow is a big holiday, so I’m very happy. To see my family is just the best.’

Sanya receive five points after racing into a stopover for the first time in the race, bringing their total to 16 points. Team Telefónica, who completed a hat-trick of victories from the first three offshore legs when they led the fleet home on Saturday, are top of the overall standings with 95 points.

Despite being visibly exhausted, the crew of 11 were all smiles at the warmth of their rock-star like reception, which came complete with autograph requests and locals queuing for a photo opportunity.

Cameras flashed constantly as the team walked to the main stage on the red carpet path. More than 200 local performers joined the procession, including dozens of traditional drummers as well as lion and dragon dancers.

Skipper Mike Sanderson said bringing Sanya across the finish line of an off shore leg for the first time in the 2011-12 edition of the race was made all the more sweet by the home crowd.

‘It’s amazing,’ said the New Zealander, who led ABN AMRO ONE to victory in the 2005-06 edition. ‘It’s late on a Sunday night here and the reception is amazing. Tiger steered for the last few hours and across the line and did an amazing job of it. He’s come such a long way.’

Commenting on their sixth place finish Sanderson said he and his crew were disappointed not to have done better but would now refocus on improving their performance in the rest of the race.

‘We’re competitive racers, we’re not here to sail around at the back of the fleet,’ he said. ‘We’ve got to look forward now. We’ve got lots of positives to take from and we can definitely get the boat going faster.

‘I’m already looking forward to having another chance to race the other guys. I really feel this isn’t a true reflection of our performance and we need to get out there and have another go.’

Team Sanya’s race home wasn’t without adversity, with the team encountering a problem with the structure supporting two of their winches on Saturday.

Sanderson’s men were quick to respond and return to full speed in a north easterly monsoon, crossing the finish line more than 32 hours after leg winner Team Telefónica.