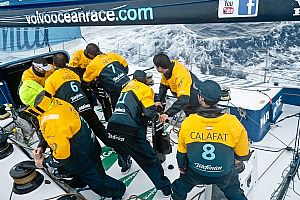 All hands on deck for the final sprint – Diego Fructuoso, Telefonica pic
Iker Martínez’s Team Telefónica was today on course for a third consecutive leg victory of the 2011-12 edition of the Volvo Ocean Race as she led the six-boat fleet on the final miles of the second stage of Leg 3 from the Maldives to Sanya in China.

At 1300 UTC today Telefónica was 274 nautical miles from the finish line and had extended her lead over Franck Cammas’ second placed Groupama to 29nm.

Ken Read’s Puma Ocean Racing powered by Berg was fifth, but had positioned themselves east of the fleet and is beginning to make gains on Abu Dhabi and Camper.

Mike Sanderson’s sixth placed Team Sanya had reached the Vietnam coast and is making good progress towards the finish, despite having to repair a fitting on their mainsail.

Overall race leader, Telefónica, finished the first stage of Leg 3 — a one day sprint from Abu Dhabi to Sharjah — in fifth, before the fleet was loaded aboard a secure cargo ship and transferred through a high risk piracy zone to the then secret safe haven port of Malé in the Maldives.

Martínez’s crew had languished in last place early in the second stage of Leg 3 after damaging their key code zero headsail hours after the start that had slowed them down for a full day.

By the time the fleet reached the first turning point on the north-west tip of Sumatra, however, Telefónica was back to full speed and took the lead after her crew took the most northerly position of the fleet.

Speaking from the boat today, Martínez put Telefónica’s comeback down to the hard work and resilience of his crew.

"Of course I’m proud of them,” he said. “They did excellent work. Everyone did his job well while helping each other,” the Spanish double Olympic medallist said.

Despite their healthy lead, Martínez said the Telefónica crew had been unable to back off for fear of losing their lead in the closely packed fleet: “It’s very tight. If anyone does a small mistake, the ranking can change accordingly,” he said.

"We were lucky with the wind – we got what we wanted going close to the Vietnam coast. As you can imagine, we are ready to arrive to China now.”

After losing miles when the mainsail control line broke overnight, Groupama skipper Franck Cammas conceded that, barring a disaster for Telefónica, the French team would have to settle for second place into Sanya.

"The mainsheet broke when we were sailing off Vietnam,” he said. “We heard a bang and 10 seconds later it was gone. “We changed all of it. We lost five or 10 miles but we fixed it easily with the spare one. It could have been dangerous but nothing happened,” Cammas said.

"I think Telefónica has a strong safety margin now. They made gains today and they have such a margin that I have little hope.

"It will be very difficult to catch up in 300 miles except if there is a squall, a gust or something unlucky for them and lucky for us.”

Walker’s crew won the opening stage of Leg 3 and, if they remain in fourth, will be tied on points for the leg with Camper.

Both crews expressed relief at being able to get away from the Vietnamese coast after each narrowly avoiding collisions with floating debris and unmarked hazards.

Camper’s Australian navigator, Will Oxley, said the crew had narrowly avoided disaster on more than one occasion and had been slowed by fishing nets on their keel several times.

"With poor quality charting multitudes of unlit fishing vessels and miles of nets, not to mention shallow wrecks from the war, the potential for disaster was high,” he said.

"We had some very near misses and ended up hooking up fishing gear a couple of times.”

Abu Dhabi skipper, Ian Walker said that his team had been close to sustaining major damage in the night when they had to swerve at the last second to miss an unlit metal navigation buoy.

"We missed it by a metre and for sure it would have made a big mess of our bow,” he said.

Walker added he was uncertain if Abu Dhabi would be able to close down Camper before the finish.

"Whether there will be anymore passing opportunities I’m not sure, because we’re set up on starboard, close to pointing at Sanya and the leg finish.”

In fifth, Puma’s crew were hoping a final roll of the dice could help them pull back at least one place as they positioned themselves to the east of the pack to benefit first from better winds. At 1300 UTC they remained in fifth but were averaging one knot faster than the other boats.

The boat’s Media Crew Member, Amory Ross, said all crew were exhausted, but resigned to having no chance to rest before they got ashore as they fought their way to the finish. “The strategy from here seems simple: don’t give up too much leverage and play each shift like it’s the last,” he said.

"The racecourse has become small enough that any gain is an important one—regardless of its size—and it promises to be a busy 36 hours of hard work fighting for every length of distance on the competition. Anything can happen.”

Telefónica is expected to complete the second stage of Leg 3 in Sanya after 0430 UTC (1230 local time) on February 4, with Groupama, Camper, Abu Dhabi and Puma all expected to finish later the same day.

Sanya is expected to receive a warm homecoming welcome the following day at around 1300 UTC (2100 local time).

SOURCE: yachte.com
Read more:
Sanya to host 2011/2012 Volvo Ocean Race
Editorial Message
This site contains materials from other clearly stated media sources for the purpose of discussion stimulation and content enrichment among our members only.
whatsonsanya.com does not necessarily endorse their views or the accuracy of their content. For copyright infringement issues please contact editor@whatsonsanya.com

Next news: Haikou to restore arcade buildings of Zhongshan Road