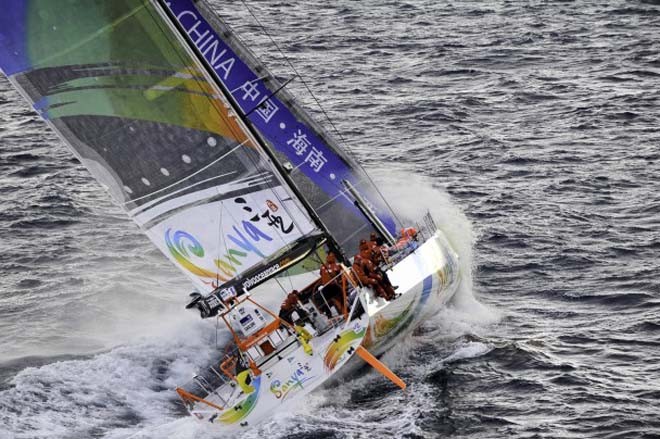 The crew of seven on board the first Chinese entry in the Volvo Ocean Race crossed the finish line at the undisclosed location in the Indian Ocean at 19:03:16 UTC, with an elapsed time of 39 days, six hours, three minutes and 15 seconds.

Skipper Mike Sanderson and navigator Aksel Magdahl, who were not on board for the finish, leaped onto Sanya from a motoring tender to reunite and celebrate with their crewmates just moments after the finish whistle sounded in the pitch black dark.

‘This wasn’t the way I’d have wanted to have completed this stage of the leg, but I’m proud of my boys,’ Sanderson said just seconds before joining his crew. ‘They did an extremely professional job, the key thing was that they looked after themselves and they looked after the boat. On both counts it was mission accomplished.’

The finish signifies a successful comeback for the team, who crashed out of Leg 2 with damaged rigging while they were leading, suspending racing on December 20.

The team sought refuge at Madagascar, where they remained for two weeks repairing their D2, before resuming racing on January 7. A tropical cyclone, the Doldrums and some short-lived trade wind sailing were all thrown into the mix as the crew endeavoured to finish what they started.

About one hour before the team crossed the line stand-in skipper Richard Mason told volvooceanrace.com he was relieved to have the finish in sight. ‘I’ve done a lot of these races, but I tell you I’ve never done anything as strange as this,’’ he said. ‘We haven’t seen some of our teammates or competitors for four weeks now. We’re very much looking forward to reuniting with the fleet.’’

Despite finishing last in the leg, Sanya will collect four points for the first stage of Leg 2. Under race rules they will also collect one point for the second stage and a further two points for the Etihad Airways In-Port Race in Abu Dhabi. There will be little recovery time for the sailors – Mason, Ryan Houston, Dave Swete, Bert Schandevyl, Cameron Dunn, ‘Tiger’ Teng Jiang He and Media Crew Member Andres Soriano – with the Leg 3 race to the team’s home port Sanya scheduled to start at 0800 UTC on January 22.

Sanderson said work on the boat would resume at first light tomorrow, and was likely to continue until just hours before the restart. ‘We now face two hard days of work to prepare for the second stage of Leg 3. Of course we’d have wanted longer, but it is what it is and we’ll be ready,’ he said.

On Saturday Sanya will be joined by the other five yachts, which are currently being transported on board a ship through high-risk piracy waters. The entire Sanya team will now regroup at the secret port and set their focus firmly on a triumphant homecoming to their home Hainan Province port in China in early February.

Next news: Sanya to set up RMB10 million bonuses to reward service industry