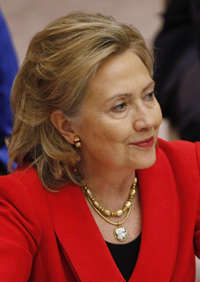 She is scheduled to meet State Councilor Dai Bingguo on Saturday, and they are expected to discuss economic issues ahead of next month’s Group of 20 summit in Seoul and the expected visit to the US of President Hu Jintao early next year, the US State Department said.
The stop comes only days after US Treasury Secretary Timothy Geithner made a similar unexpected stop in Qingdao, Shandong province, for talks with Vice-Premier Wang Qishan. Details were not released but news reports said they discussed currency issues.
"We are seriously engaged in high-level diplomacy to ensure that this trip and the preparations for it go smoothly," Kurt Campbell, assistant secretary of state for East Asia and Pacific Affairs, who will accompany Clinton, told a State Department briefing in Washington on Tuesday.
"It’s very important to have a strong, constructive relationship with China," Campbell said.
"I think most … in Asia appreciate the need for a cool-headed, constructive diplomacy between the United States and China," he added.
The frequent and high-level meetings between the two countries seem to contradict the perception that bilateral ties have nosedived since the beginning of this year.

Beijing and Washington have clashed recently over the value of China’s currency, US arms sales to Taiwan and US President Barack Obama’s February meeting with the Dalai Lama.
The two countries have also been at loggerheads over the South China Sea, where China and several Southeast Asian countries have conflicting territorial claims.
Analysts said that through frequent exchanges between senior officials of each side, either formal or informal, Washington and Beijing are looking for ways to ease tension ahead of the reported upcoming visit by Hu to the White House.
The last-minute decision to include China in Clinton’s Asian trip is also a sign that the US seeks to bolster mutual trust, said Yuan Peng, director of the Institute of American Studies at the China Institutes of Contemporary International Relations.
"The US is trying to ease China’s suspicion aroused by Washington’s frequent interaction with its Asian allies and its high-key re-engagement in the region," Yuan said. Misunderstandings will not benefit either side, he added.
The US government had been criticized for initially excluding China from Clinton’s lengthy trip, especially when bilateral ties are under the spotlight, according to Gong Li, a professor of international strategic research at the Party School of the Central Committee of the Communist Party of China.
Jack Pritchard, president of the Korea Economic Institute in Washington, told Reuters that both sides wanted to stabilize the relationship and the Chinese "probably are not looking at it (Clinton’s trip) as touching base with all the nations that encircle China".
Built around this week’s East Asia Summit in Hanoi, Clinton’s tour from Oct 27 to Nov 8 will also include stops in Vietnam, Cambodia, Malaysia, Papua New Guinea, New Zealand, and Australia.
In addition to Clinton’s Asia-Pacific swing, Obama will travel next month to India, Indonesia, South Korea and Japan.
Though the stop in China was only announced at the last minute, Campbell said that the decision was in line with the agreement between Clinton and Dai that both sides needed to take opportunities for more informal diplomacy.
The duo oversee political discussion in the China-US Strategic and Economic Dialogue, with Geithner and Vice-Premier Wang chairing the economic dialogue.
Experts also believe that informal bilateral meetings have become a new mechanism for Sino-US coordination.
Both sides benefit from such interaction in addition to the Strategic and Economic Dialogue, said Gong.
According to Yuan, high-level exchange mechanisms between the two countries have developed, and both countries are trying to overcome friction in the relationship.
SOURCE: chinadaily.com.cn
Editorial Message
This site contains materials from other clearly stated media sources for the purpose of discussion stimulation and content enrichment among our members only.
whatsonsanya.com does not necessarily endorse their views or the accuracy of their content. For copyright infringement issues please contact editor@whatsonsanya.com

Next news: 17yo girl accused of making false testimony after being raped in Sanya